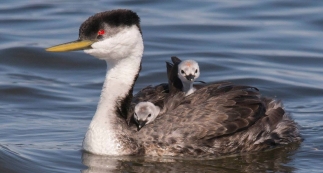 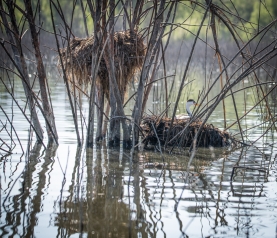 June 4, 2019 (Escondido) – A coalition of environmental groups has sent an urgent request to the San Diego County Water Authority asking for an emergency directive to halt pumping of water from Lake Hodges which has left grebe nests with eggs “high and dry” for the third time this season. The lake is in the city of San Diego, which has advised ECM today that it is taking steps to address the problem.

Grebes are famed for “dancing” across the water during mating system, drawing visitors for the spectacle. (View video of dancing grebes and a new video titled “Save the Grebe Chicks of Lake Hodges.”)

The letter, signed by the Sierra Club, San Diego Audubon Society and four other environmental organizations, states that an estimated 300 eggs have been lost recently at Lake Hodges, from Western and Clark’s Grebes nests, some just days from hatching.

The environmental groups contend that any draining of Lake Hodges during this peak nesting season violates the Migratory Bird Treaty Act as well as California Fish & Wildlife Code Section 3505 which states that “it is unlawful to take, possess, or needlessly destroy the nest or eggs of any bird except as otherwise provided by this code or any regulation made pursuant thereto.” 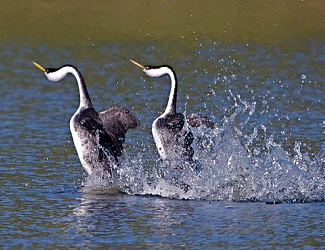 Renee Owens, a wildlife biologist, says this it is normally a standard request forwarded to environmental staff who would ask for a delay to avoid harming nesting birds, but not this time.  She says the water level has dropped over seven feet recently despite heavy rains and that birders at Lake Hodges say the draining has been going on for the past two years.

“This is not only unconscionable and avoidable, it is also illegal,” she confirms, urging concerned residents to contact state and federal wildlife agencies and ask them to enforce the laws.

City spokesman Scott Robinson said the grebes’ long nesting season poses a challenge, he told the San Diego Union-Tribune last week, as well as requirements to keep the lake at 295 elevation or below to protect the dam structure and surrounding communities.  Recent rains had raised the level to 304 feet, according to Robinson, forcing the city to lower the water level.

ECM has contacted the County Water Authority for an update on the situation.  The CWA sent us a letter that acting general manager Sandra Kerl sent to the CWA board.  It states, "As background, due to this year’s rainfall, the level of Lake Hodges reached a maximum elevation of approximately 304 feet. In anticipation of the impending level restrictions for Hodges Dam and to utilize the local water supply, the City of San Diego requested the Water Authority to move 4,500 acre-feet out of Lake Hodges and deliver it to the City’s treatment plants and/or San Vicente Reservoir. The water transfer was performed from March 21st -31st and April 22nd-25th. "

She acknowledges, "The water transfer request was made during the nesting season of the Clark’s and Western Grebes, which build their nests on partially submerged sticks and branches at the water’s surface. As a result of the water transfer, the lake level was lowered by approximately 4-5 feet adversely impacting the nest of the Grebes."

Kerl's letter, sent to the board May 30th, says the CWA received email inquries May 29th regarding the lake operations and concerns over the water transfer impacting the Grebe nests, adding, "In working closely with the City on responding to these concerns, the City of San Diego has issued the attached statement in response to the inquiries. In regards to Water Authority operations of the Lake Hodges Pumped Storage Facility, we are closely coordinating with SDG&E to ensure that the pump storage operations do not negatively impact the Grebe nesting."

This afternoon, Arian Colllins, supervising public informatoin officer for the city of San Diego, sent a reply affirming that the water level must be kept at 295 "to maintain safety of the dam structure and surrounding communities" which prompted the need to reduce the level that had reached 304 feet after the rains. Collins adds, "There are no additional or special protections that would be applied to the lowering of the reservoir level, as neither the Western Grebe nor Clark’s Grebe are listed species on the California Department of Fish and Wildlife’s sensitive species list. Neither the City of San Diego or the San Diego County Water Authority intentionally or purposefully remove or destroy active nests."

According to Collins, "As a constructed water facility, the intended purpose of Hodges Reservoir is to capture local water from runoff for the maximum use by the City and other water agencies. While the reservoir is owned by the City, other water agencies have water storage rights and transfer water to their systems. Additionally, Hodges Reservoir is a key component of the Water Authority’s Emergency and Carryover Storage Project, which includes the operation of a 40-megawatt pumped storage hydroelectric facility. This pumped storage hydroelectric facility is also the mechanism used to transfer City water out of Hodges Reservoir and in to the City’s distribution system."

None-the-less, Collins indicates the city is taking actions to address the concerns, stating, "The City of San Diego has been coordinating with Brian Caldwell of Lake Hodges Photo Tours to monitor the current active grebe nests and fluctuations in the water level. Mr. Caldwell estimates the eggs laid in the first full week of May should hatch in the first week of June. To that end, the City, the Water Authority and other agencies will partner to minimize water level fluctuations for the next seven to 10 days. The nesting season for grebes can last from spring to fall, making it a challenge to avoid, and the City remains mindful of the reservoir habitat. City activities are reviewed by an environmental compliance team to ensure projects minimize impacts to the environment and appropriate permits are obtained prior to work activities."

But Owens is not satisified with that response. In an e-mail this evening to ECM, she writes, "The contention that they must keep the water at that level is also disingenuous, they have discretion."

To say "we are monitoring things" and nothing else is appeasement language, not taking responsibility language. Lowering the water at this time of year harms nesting birds. That is not up for debate, as evidence has already revealed. Meanwhile, to claim there are no "additional or special protections" for the grebes is not only a parochial response that says “we don’t have to care about these birds”, it is simply wrong. Being protected by both federal (Migratory Bird Treaty Act) and state law (Fish and Game code) means they are, well, protected, and the City biologists know this if only they had been consulted. Meanwhile, smart, economical conservation means protecting animals before they are in danger of extinction, not waiting until the eleventh hour to care about our iconic wildlife.