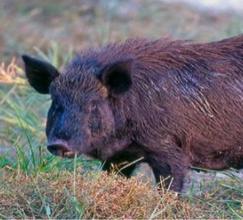 Officials report that monitoring through trail cameras and other means indicate there could be just eight feral pigs left in our region.  Professional hunters hired by federal, state and local governments have trapped and killed about 150 of the pigs over the past five years, the Union-Tribune reports. Drought has also taken a toll on the invasive species.

The feral pigs are not native to our region. They first showed up here around 2007, perhaps brought in by hunters and released. By the time an eradication program was ordered in 2014, some estimated there were more than a thousand wild pigs rooting up the environment like tusked Rototillers.

But officials now acknowledge that early estimates were too high.

Although it’s been legal for individuals to hunt wild pigs with a permit, the pigs tend to frequent remote locations and the prospect of hauling out a porker weighing hundreds of pounds proved too daunting for most, so the pigs flourished until the professional teams were brought in. So local hunters won’t have the opportunity to bring home the bacon—literally—once the last of the portly porkers are gone.

The plan drew some opposition from animal rights advocates, but officials said live relocation was not feasible due to the remote locations and the fact that the feral pigs are not welcome anywhere else.  So the pigs were euthanized and buried on location.

Many of the pigs were damaging habitat for other wildlife on public lands, such as Hauser Wilderness Area and Cleveland National Forest in East County. The pigs also posed potential public health risks, since they carry over two dozen diseases, according to the Centers for Disease Control.