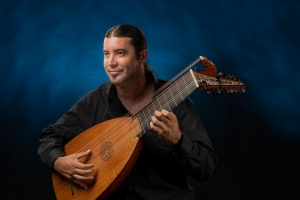 The lute was a popular musical instrument in 16th and 17th century Europe, with repertoire spanning the Renaissance and Baroque periods of art and music.

Sylvius Leopold Weiss was one of the great masters of the Baroque lute. Born in what is now Poland, he toured European royal courts and composed over 600 pieces for solo lute. A contemporary of Johann Sebastian Bach, he famously competed with the German master at improvisations, Weiss on the lute and Bach on the harpsichord.
Eric Dickerson is a Master of Music Performance from San Diego State University. After four years of dedicated study on the classical guitar with San Diego legend Fred Benedetti, Eric began his apprenticeship on the 11 and 13 string alto-guitar with world acclaimed virtuoso, Andreas Koch of Germany. Since completing his graduate studies in 2020, Eric has continued his journey by studying the 13 course Baroque lute with Galant Lute Master Vinicius Perez.
In 2021, after only one year of study on his instrument, Eric was awarded the Robert Crim Scholarship from the Lute Society of America, given to a "promising student of the Baroque lute."
With over 20 years of musical experience, Eric has deeply committed himself to preserving the art of Historical Performance Practice by playing music from the 16th through 19th centuries on historical instruments. He currently performs concerts nationally on the Baroque and Romantic guitar as well as the Baroque and Renaissance lute.
Free-will donations support the artist, suggested donation $20.