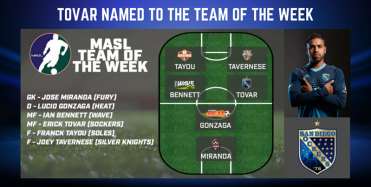 December 19, 2017 (San Diego) - Sockers midfielder Erick Tovar was named to the MASL Team Of The Week for week eight. It is the fifth consecutive week, when the team was eligible, that a Sockers player has been honored. Anthony Medina, who was playing in his first game of the season, was placed on the Honorable Mention List.

Tovar tallied his first hat-trick of the season in the Sockers, 9-2, win over Turlock on Sunday. He is third on the team in scoring with 10 points on seven goals and three assists.

Medina, a fan favorite and longtime Socker, scored two goals in his season debut. His efforts earned him a spot on the honorable mention list.

Jose Miranda (Ontario Fury) – Miranda helped the Fury to a big win over the RGV Barracudas. The stingy goalkeeper only allowed two goals on twelve shots (.833 save percentage) as the Fury won 9-2.

Lucio Gonzaga (Harrisburg Heat) – The Heat had back-to-back games this weekend with ten goals scored between them. Gonzaga accounted for a third of those, with two goals on Friday and one on Saturday.

Ian Bennett (Milwaukee Wave) – The Milwaukee Wave remain one of the MASL’s two unbeaten teams and Bennett is a big reason why. Against division rival St Louis, Bennett stepped up with 5 goals and three assists.

Erick Tovar (San Diego Sockers) – The San Diego Sockers are the MASL’s other undefeated team. Tovar is just the latest San Diego player to step up in a big way. On Sunday night he scored his first hat trick of the season against Turlock.

Joey Tavernese (Syracuse Silver Knights) – It may still be early in the season but every game is important within the Eastern Division. Tavernese led the way for the Silver Knights with 3 goals and an assist as they went into Harrisburg and came out with big 8-5 win.