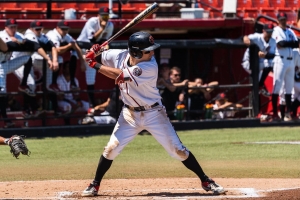 Aaron Eden and Adrian Mardueno combined to allow just one earned run, but two errors allowed four unearned runs to score. After Eden surrendered a leadoff home run to Bryson Stott in the top of the first, the freshman settled in nicely, finishing his outing with five strikeouts in 5.1 innings while scattering seven hits.

Mardueno allowed two hits over his 2.2 innings and did not allow an earned run while striking out three. Mardueno and Eden held the Rebels hitless over 13 at-bats with runners in scoring position.

SDSU tied the game at 1-1 in the top of the third, using an Angelo Armenta sacrifice fly to left field to score Mike Jarvis.

The errors committed by the Aztecs in the fifth and seventh innings allowed two runs to score on each play and brought the score to its final 5-1.

Casey Schmitt reached base in all four of his plate appearances, registering a pair of base hits while drawing a walk and a hit by pitch.

The Aztecs struck out just once in the game, tying their season low. UNLV's Chase Maddux earned the win for the Rebels, allowing one run on five hits in his seven-inning start.

SDSU has no midweek games for the first time in the 2019 season this week. After the brief hiatus, the Aztecs host San Jose State (18-26, 12-9 MW), who presently stands a half-game ahead of the Aztecs for second place in the Mountain West standings.