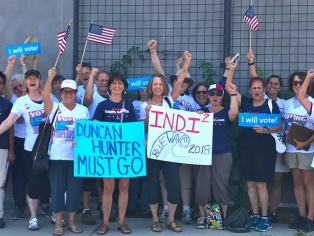 November 16, 2018 (Escondido) -- Just as Texas Senate candidate Beto O’Rourke is being credited with the “Beto Effect” – a massive voter turnout that lifted down-ballot Democrats to victory in Congress and the Texas legislature – a similar, if smaller, dynamic may be taking place in CA50.

Extraordinary voter outreach on behalf of congressional candidate Ammar Campa-Najjar exceeded any effort on behalf of a Democratic campaign in CA50 history. While ballots are still being counted at the San Diego County Registrar of Voters, with 92,873 votes, Campa-Najjar has more than doubled the vote for Duncan Hunter’s last midterm challenger, James Kimber, who received 45,302 votes in 2014, according to Ballotpedia.