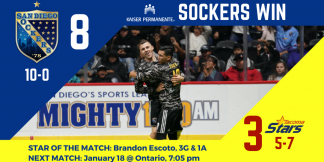 Sockers remain undefeated at 10-0 before schedule gets tougher; Chiles and Farber score two goals each, while Toth earns fifth victory

Brandon Escoto notched his first hat trick of the year to pace the Sockers offense. He added an assist to tally four points on the evening. Brian Farber and Kraig Chiles each scored twice, while rookie forward Andy Lorei tallied his first career MASL goal in the second quarter.

San Diego led 6-0 at the half before Tacoma struck for two goals to get as close as they would get all night. The teams traded goals in the fourth to finish the scoring.

Goalkeeper Chris Toth made six saves on nine shots to earn his fifth win of the season.

The schedule will get tougher as the Sockers will have three matches in fours days against quality opponents Ontario, Sonora and Ontario again.