By Briana Gomez
June 3, 2021 (San Diego) -- The San Diego Union Tribune hosted a virtual town hall meeting last Thursday via Zoom on “Ethics in the Media.”
“Like other difficult philosophical questions, a really important part of this is community standards,” said Lora Cicalo, Managing Editor.
Cicalo gave opening remarks following an introduction by Luis Cruz, Community and Public Relations Director.
Moderators broke out into separate Zoom “breakout rooms” where attendees could address possible issues in ethics.
One of the dilemmas that came up was regarding journalists using sources who are their friends.
Kate Morrissey addressed objectivism in journalism, citing historical practices when journalists abstained from voting to avoid bias.
“Should we be allowed to march in peaceful protests when someone is killed?” Morrissey questioned the audience, adding that it would be addressed in the next breakout room.
The audience was then encouraged to take a poll with questions regarding what activities journalists should be allowed to participate in. While the majority believed journalists should be able to march in a women’s march, share personal experiences on issues and donate to nonprofits that they don’t write about, most believed journalists should not donate to nonprofits that they do cover.
The audience was mixed on whether journalists should be allowed participate in a vigil for someone killed by police (40% said yes, 40% said no, and 20% were not sure) or whether a journalist should be allowed to participate in a protest against systemic racism or a racist incident (44% said yes, 44% said no, and 12% were not sure.)

The next breakout room addressed guidelines that Jorge Ramos made for journalists.
The breakout rooms were moderated by UT reporters who led the discussion.
Some participants agreed with the list while others found problems around it, saying that journalists should mitigate what they say publicly.
“Maybe our newsroom doesn’t look like our community,” said Diana McNabe, raising a topic that participants in her group brought up. This means that the newsroom does not necessarily have the appropriate ratio of diversity reflective of a community and therefore speaking out on topics should be treaded on cautiously. 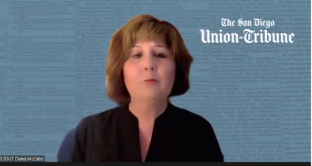 The last question for breakout group discussion asked whether participants’ perspectives changed on any topics after the town hall, and whether it is helpful to hear from the community about what they expect from us as journalists.
The meeting ended promptly at 7 p.m. with the hope of finding further discourse with the community.
Like the Union Tribune, East County Magazine is also committed to the highest ethics in journalism and welcomes feedback from our community to improve community standards.