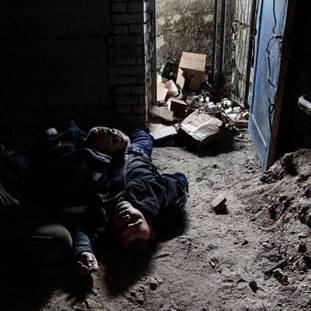 April 4, 2022 (Ukraine) – After Russian troops withdrew from several besieged Ukrainian cities, horrifying evidence of war crimes have emerged. International media, human rights groups, and Ukrainian officials have all provided documentation of atrocities including mass graves, executions of civilians – some with hands bound behind their backs, rapes, murders including children, bodies boobytrapped with bombs, and efforts to cover up war crimes by burning bodies.

Russia is also accused of forcibly relocating as many as 40,000 residents of Mariupol to areas of Eastern Ukraine held by Russian forces and even more troubling, some have been relocated to camps inside Russia. Satellite images released by Maxar Technology in the U.S. and verified by the Washington post confirm construction of a camp in Russia to hold Ukrainian civilians. The fate of these hostages remains unknown.

Though Russia’s ambassador has claimed evidence of war crimes have been “faked” and that the killings occurred after its troops withdrew, the New York Times reports that satellite images show bodies of murdered civilians were in the streets of Bucha for weeks, while Russian troops occupied the city.

The U.S. has also called for the United Nations to oust Russia off the UN’s Human Rights council, an action expected to be voted on this week. The International Criminal Court in the Netherlands has also launched an investigation. In a rare moment of agreement, the U.S. Senate unanimously approved a resolution recently calling for ani investigation of Putin and other Russian government officials for war crimes. The U.S. State Department has confirmed that the U.S. supports sending a multinational team of war crimes experts to Ukraine.

Killing civilians constitutes a war crime under international law. For weeks, videos have documented Russia’s apparent intentional targeting of civilian sites including hospitals, refugee shelters and apartment buildings, among others.

Foreign Policy reports that 270 people or so have been buried in tswo mass graves in Bucha, a small city outside Kyiv.  The BBC, Britain’s major media outlet, documented evidence of burned bodies outside of Kyiv, one wearing a wedding ring.  A Ukrainian drone operated by the Bugatti unit of Territorial Defiance showed Russians cold-bloodedly executing a man with his hands raised over his head in a surrender gesture. He was part of a convoy of civilian vehicles trying to evacuate, the BBC reported.

The Kyiv Independent, a Ukrainian newspaper, has published deeply disturbing images including an entire family murdered, even a little girl left naked beside her parents. Reuters news out of France reported finding a body of a man shot in the head, his hands tied behind his back, as well as hands and feet protruding from a mass grave by a church, where a 45-foot-long trench had been dug.

Human Rights Watch personnel have also documented apparent war crimes in occupied Chernihiv, Kharkiv and Kyiv including rape and executions of civilians forced to kneel in the dirt, faces covered.

Ukraine’s prosecutor general Iryna Venediktova posted on Facebook that 410 bodies have been found in the greater Kyiv region. 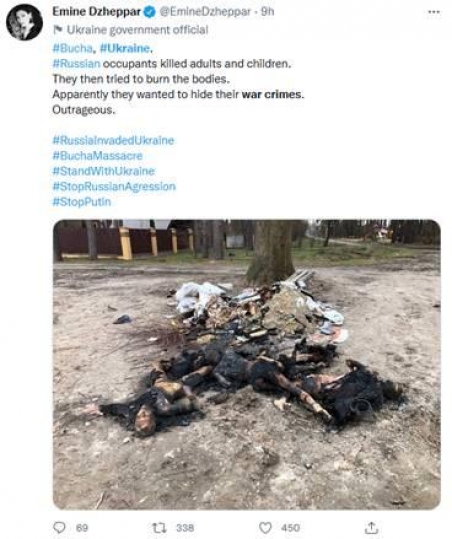 Photo, right: Burned bodies of civilians, including adults and children, posted by Emine Dzheppar, a Ukrainian official, on Twitter

Hundreds of civilian deaths have already been documented, but some fear even more atrocities will be discovered once Ukrainian forces are able to get into other cities ravaged by Russian attacks, including Mariupal, where over 90% of buildings have been destroyed.

Many world leaders have spoken out to denounce Russia’s apparent war crimes.

NATO Secretary General Jens Stoltenberg denounced the gruesome images from Bucha as “brutality against civilians we haven’t seen in Europe for decades.”

European Union Parliament’s President Roberta Metsola said “atrocities committed by the Russian army in Ukraine are horrific…These are war crimes…and these coordinated acts of inhumanity cannot remain unanswered,” calling for all responsible to be held accountable.

French President Emmanual Macron voiced shock and c ondemnation, stasting, “There is clear evidence of war crimes.” In addition to accountability, he also called for “a new round of sanctions” and very clear measures.

One prominent leader who has not openly denounced Russia’s recent war crimes is former U.S. President Donald Trump, even after the disturbing Bucha revelations. Instead, Trump this week called on Putin to release negative information on Biden’s son, Hunter and alleged dealings in Ukraine, Politico reports.

Ukrainian President Volodymyr Zelenskyy, in a video, enumerated the various war crimes including “hundreds of people killed. Tortured, executed civilians. Bodies on the streets. Boobytrapped area. Even the bodies of the dead are boobytrapped.”

Zelensky declared, “Concentrated evil has visited our land,” then called the Russian invaders “killers, executioners, rapists, marauders who call themselves an army.”

Ukraine’s President noted that the world has seen war crimes before in other places, but implored, “It is time to do everything so that the war crimes of the Russian military become the last manifestation of such evil on earth.”