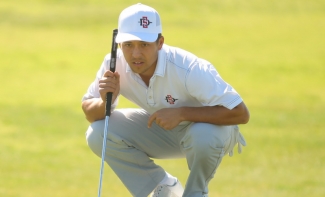 October 3, 2017 (San Diego) - Former San Diego State men’s golf All-American Xander Schauffele was named PGA Tour Rookie of the Year on Tuesday, as voted on by the Tour’s membership for the 2016-17 season.

PGA Tour members who played in at least 15 official money events this past season were eligible to vote. The balloting process ended on October 2.

“On behalf of the PGA Tour, congratulations to Xander Schauffele on being voted PGA Tour Rookie of the Year,” said PGA Tour Commissioner Jay Monahan. “Being recognized by your peers is one of the highest honors a player can receive, and Xander’s win at the Tour Championship during the FedExCup Playoffs capped off what had already been a remarkable rookie season.”

With his award, Schauffele becomes the fourth member of the high school class of 2011 to earn PGA Tour Rookie of the Year honors, joining Jordan Spieth (2013), Daniel Berger (2015) and Emiliano Grillo (2016). Justin Thomas, another member of that class, won the FedExCup this season by holding off Spieth and Schauffele, his nearest competitors.

Last month, Schauffele completed his brilliant 2016-17 campaign by winning the PGA Tour Championship at East Lake Golf Club in Atlanta, Georgia, where he shot a 12-under-par 268 to win by one stroke over Thomas.  For his efforts, the Aztec alumnus rose to No. 32 in the world rankings.

In addition, Schauffele was one of six multiple winners during the 2016-17 season, joining Thomas, Spieth, Dustin Johnson, Hideki Matsuyama and Marc Leishman. In 28 starts, he turned in four top-10 finishes among 20 made cuts.

Earlier this year, Schauffele tied for fifth at the U.S. Open in Erin, Wisconsin before collecting his first career PGA Tour win with another dramatic one-shot victory at The Greenbrier Classic in White Sulphur Springs, West Virginia. Last October, he also landed in the fifth position at the Sanderson Farms Championships in Jackson, Mississippi, and tied for 11th at the Zurich Classic of New Orleans in April.

In his three years on Montezuma Mesa, Schauffele compiled 21 top-10 finishes, 16 top-five placements and two individual titles before graduating with a degree in social science. He also owns the school record with a 71.50 career scoring average in 118 rounds played, as well as the program’s single-season standard of 171 birdies set in 2014-15.