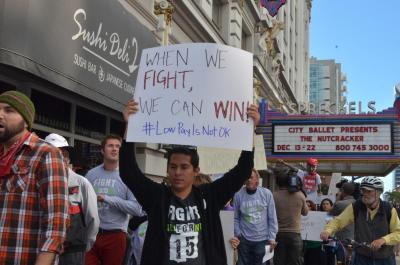 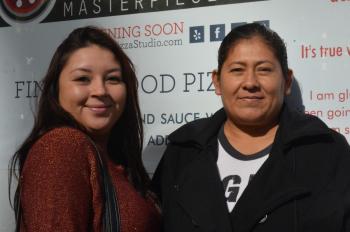 Violeta Gonzalez has been working for Wendy’s at 101 Broadway downtown for a year. She is also a student at Center City Community College. Gonzales told ECM that she started at $8.00 and after a year she received an increase of only ten cents. She added that she only gets 15 hours a week and that is not enough to pay bills, rent, food and transit fees. “I am still looking for a second job,” she said.

ECM also asked about job conditions. An order during lunch time has to be processed within three minutes of placement. This means that employees have to move very fast. When it is not as busy, outside of peak times, an order has to be filled within five minutes. Near closing time it might take longer as they need to refill items to keep them fresh.

Gonzalez has closed the restaurant down at times and that means finding transport back home late at night, or at times walking home a good 15 blocks from her work place.

According to the Center on Policy Initiatives, “Almost 1448 local residents now earn the living wage, which is $29,099 a year for a full-time job. Compared to the $16,640 annual total on minimum wage, that difference is enough to move a family from below poverty to self-sufficiency.” http://onlinecpi.org/campaigns/living-wage/

Increasingly, fast food jobs are not just for teenagers.  Workers need the assistance to make ends meet, as the experiences of Gonzalez and Neri illustrate.

According to Brownell, “The fast food companies can afford to pay the cost of every worker currently paid with taxes.” McDonalds alone made $27.6 billion last year, with a total profit of $5.46 billion. The company paid its chief executive officer $13.75 million. Wendy’s where the protest was held today, had total revenue of $2.5 Billion and a profit of $7 million, with a CEO pay of $5.89 million.

The counter argument is that raising pay would lead to fewer jobs in the industry, and that the price of food would go up. Higher wages could also lead to the closure of restaurants and the layoff of workers.

Jamie Richardson, a senior White Castle executive told CNBC today that raising wages to $15 an hour, as workers have sought, would force the closure of half of its locations. He called that scenario catastrophic and said even the lower increase that President Obama has called for—to $9 an hour--would be damaging for the fast food industry. http://www.cnbc.com/id/101247794 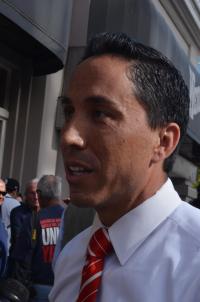 Acting Mayor Todd Gloria told ECM that the City of San Diego “has taken numerous steps” to increase wages, including a prevailing wage ordinance, which means any workers with contracts with the city will get better pay. He came to this event to support the workers. He later told the crowd, (over a hundred strong) that as the son of a maid and a gardener he understands and came to offer moral support to the workers.

Richard Barrera, Secretary-Treasurer of the San Diego-Imperial Labor Council, told the crowd that the poverty of the food workers also shows up in the schools. (He is also a member of the board of the San Diego Unified School District). Many of the kids come to school hungry and qualify for the school breakfast and lunch programs; at times these are the only good meals those children receive.

ECM talked to Barrera about the effect of these strikes in the East County. Barrera told ECM that if Congress increases the minimum wage, “the question is whether they will increase it above where it is in the State of California. I believe we should be having local community by community activities to increase the minimum wage.” He pointed out that the City Council in Washington DC just did increase it to $11.50/hour.

He added, “We could do it here in the City of San Diego, but they could also do it in the City of El Cajon or La Mesa.” ECM raised the issue of unincorporated areas of the County, and Barrera added that the Board of Supervisors could indeed vote on this countywide.

It is also the case that the State of California has raised the minimum wage already. In July of 2014 it will go up to $9 hour and by 2016 it will be $10 an hour. This means that by 2016, a minimum wage worker in California will be making a raw pay of $19,400 per year, assuming full time employment, before taxes.

Workers and their supporters, including union members and the Interfaith Council for Worker Justice, marched around the block a couple times. Then they broke up for the afternoon event, which was a rally partly in support of Leobardo Masa, who was fired after participating in a strike for $15 an hour wages earlier in the year by his employer, McDonalds.

A Wendy’s representative advised ECM that they had no comment. The same happened at the McDonald’s location in Bonita.

The demonstration in Bonita resulted in a confrontation, though it ended peacefully.

During the event ECM was able to talk with Masa, who said he did not know exactly why he was fired. Though he suspects it was because he gave a burger to a homeless man, which is unprecedented. He has seen people get fired for what seems like non events and says that workers are scared to speak out. 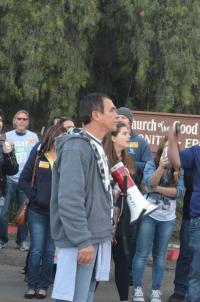 As the strikers were getting ready to go, the group decided to try to turn the petitions in support of Masa over to his employer, the owner of 13 franchises in San Diego, Bob Sutherland. When the franchise manager did not take them, they decided to drive to his home, about five minutes from the Bonita franchise.

As they arrived at the street and tried to turn up a hill, they were prevented from going further by both uniformed and non-uniformed Chula Vista Police Department officers. The two uniformed officers who were initially present, with a single squad car at the bottom of the hill, quickly got back up from non-uniformed personnel.

It became a short standoff, and one of the activists left with his children, after officers raised their voices. The activist said he was leaving because his young children were scared.  This standoff was resolved within 20 minutes or so with no arrests and no citations. The officers contended that the road was a private road; therefore there was no access to the general public. Signed marked it as private property.

This is the raw video of the de-escalation. There were no arrests or citations issued. http://www.youtube.com/watch?v=UcseyrnVjsg&feature=youtu.be

Masa would still like to ask his former employer as to the actual reason for getting fired. He would also like to get his job back. He says he is in this fight for a living wage for as long as it takes.

The morning turnout downtown was over 100 strong; about 30 attended the afternoon rally in Bonita.

The 2 previous posters just do not understand. It is the DUTY of every citizen who was lucky enough to have a job or good career to provide for those who have very little. As it says in the California State Constitution ...“Workers of the world unite! You have nothing to lose but your chains.”, Oh wait, that was Karl Mark, never mind.

I have no sympathy either for someone who complains they need more money, while they work 24 hours a week and DON'T speak the language of THIS country and brings children into this world they cannot even begin to support. 7 kids? Really?  Where is the Father?  Where is her child support?   I saw Ms. Neri on the news, she does not even speak english.  An employer is not required to pay you what YOU  want.  You are paid commesurate with the skill level of the job you do.  Want $15 an hour?  Find a $15 an hour job and apply for it.  See if your skill level gets you the job.  See if not being able to properly communicate with citizens of this country gets you the job.  Don't like your employers policy on feeding the homeless or the fact that you will be required to perform your job in a timely manner?  Don't expect $15 an hour or even a job.   I am so sick of this entitlement attitude for unskilled people.  What exactly do they think will happen when they get $15 an hour?  Food prices through the roof, their hours cut, and business closing that cannot maintain that wage.  NO ONE is stopping you from bettering yourself and moving up to a better, higher paying job.  Quit waving a sign and get busy.

I really can not have any sympathy for the woman who wants higher wages because she dosn't have enough money to house and feed her SEVEN children.  Most intelligent people have only the amount of children they know they can care for properly for the eighteen years or more for which they are responsible.  I am resentful that we have to not only pay welfare for her (and others) to raise their children, but now she wants our food costs to go up because she acted irresponsibly.