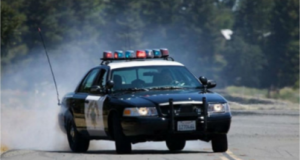 Update: One of the motorcyclists killed in the Ramona crash has been idenitified as Matthew Thomas Huthmacher, 51, of Descanso, according to the county Medical Examiner's office.
By Miriam Raftery
Photo: CHP cruiser, via CHP
January 11, 2021 (Ramona) –Two crashes minutes apart in Ramona and Santa Ysabel yesterday resulted in three fatalities.

CHP and fire personnel responded to the scene shortly after the crash.  One of the motorcyclists suffered major injuries and was transported via air ambulance to Palomar Medical Center in Escondido for treatment.  The other motorcyclist succumbed to his injuries on scene.

The driver of the Ford, 71, sustained only minor injuries and was not transported to the hospital. His two passengers sustained no injuries.  At the time of this release, it is still unclear which motorcyclist was riding which motorcycle when the crashes occurred, says Officer Travis Garrow with the California Highway Patrol. Both motorcylists wore helmets and the Ford driver wore a seatbelt. It is unknown if alcohol or drugs may have been contributing factors.  Anyone who may have witnessed this crash is encouraged to call the CHP El Cajon area office at 619-401-2000.

The second accident, a solo ehicle crash, occurred around 5:05 p.m. A white Chevrolet Camaro heading east on San Vicente Road west of Wildcat Canyon Road, reportedly at a high rate of speed, crossed onto the westbound side of the roadway and went off the edge of the roadway. The driver struck several trees and caught fire .

The driver and a passenger not yet identified both died at the scene of their injuries, says Officer Garrow. It is not yet known if drugs or alcohol may have played a role in the crash.

I don't know what to say at this point. We live here. During one of our first trips to the Julian area, during which we fell in love with the place, we were witness to a motorcycle death on hwy 78. A friend of ours witnessed the decapitation of a motorcyclist who was leaning out hard as they crossed the double yellow to pass. A truck in the other lane helped him with his helmet. We avoid driving on Banner Grade on a weekend day, as we will be passed across a double yellow at least 10 times going up, and down. And we are the types who religiously use slow traffic pull-outs. This is dangerous, not only for the bikers, but also for us. I hate to say it, but unless there is some law enforcement effort to stop this carnage, I honestly don't suggest that anyone drive to the Julian area on either a holiday, or weekend. It is too much of a Darwin award race out here to risk for some apple pie. Please do try to come on a weekday! This madness is purely a weekend thing.