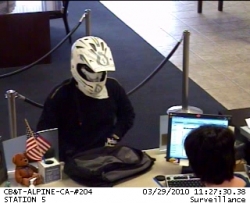 March 30, 2010 (Alpine) --The FBI and San Diego Sheriff’s Department ask the public’s help to identify a man who robbed a California Bank & Trust at 2250 Alpine Boulevard yesterday at 11:27 a.m. After the robbery, the suspect fled on a red BMX type bicycle westbound on Alpine Boulevard and was last seen heading westbound on Arnold Way.

Witnesses describe him as white, age 17 to 25, 5’7” to 5’8” in height, weighing 140 to 150 pounds. He wore a full-face, off-road motorcycle helmet with a black design on top, a white bandana covering his face, goggles or sunglasses, a black sweatshirt, black pants and white sneakers.

The robber approached the first victim teller and stated, “Give me your money.” He then lifted his shirt as if to show the teller he had a weapon, but none was seen. He slammed his hand on the counter and again demanded money. Quickly becoming impatient, he reached over the counter, opened the teller drawer, and took out the money.

The robber then proceeded to a second teller, again reaching over the counter attempting to open the cash drawer, this time unsuccessfully. He approached a third teller and made another verbal demand for cash. He also attempted to rob two empty teller stations during the course of this ro
Anyone with information concerning this robbery is asked to contact the FBI at (858) 565-1255.

I don't want to sound like I like the guy... cause I obviously don't condone his actions.

That being said, wow! He gets some major "safety" points for this robbery! A disguise with built in protection :)
Sean
Beer-Pong-Table.net