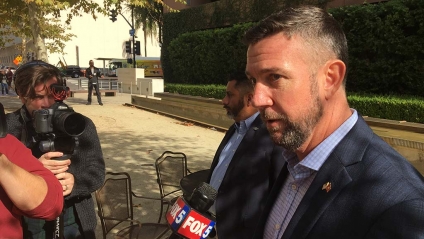 Photo:  outside a federal courthouse in 2019, Rep. Duncan Hunter discusses another case. Photo by Ken Stone

April 2, 2022 (San Diego) - Nearly six years after it received a complaint about then-Rep. Duncan D. Hunter’s suspicious spending, the Federal Election Commission this week took the wraps off its investigation.

The FEC, reaching the same conclusions as a criminal probe, fined the six-term GOP congressman, his wife and his campaign committee $16,000 for illegally tapping donor money like a personal piggy bank.

Why $16,000 — about a tenth of a potential “civil penalty”?
For one thing, his campaign committee reported $14,000.19 cash on hand.
Hunter, 45, dodged a prison sentence of 11 months, having been pardoned by President Trump in December 2020. Hunter’s estranged wife, Margaret, facing eight months home confinement, also was pardoned.
“In ordinary circumstances, the [FEC] would seek a substantially higher civil penalty of $133,000 based on the violations outlined in this agreement that remain within the statute of limitations,” the agency told Noah Bookbinder of Citizens for Responsibility and Ethics in Washington, which filed the original complaint in April 2016.
But the FEC said it took into account the fact that Hunter’s campaign committee has “demonstrated a lack of financial resources and the inability to raise additional funds.”
It said Hunter’s committee had $39,941.96 in outstanding debts. But if Hunter closes the fund-raising group, and later receives checks, he promised to sign over such payments to the U.S. Treasury.
The half-Republican FEC in effect refuted what Hunter’s chief of staff said at the time of the watchdog’s complaint — that “CREW is a leftist organization that is targeting Trump supporters.”
But Duncan Lee Hunter, father of the disgraced East County congressman, was quoted by The San Diego Union-Tribune as saying Friday: “This FEC decision clearly reflects that the criminal prosecution of Duncan was a political hit job.”
In a dump of previously secret memos and letters, the FEC revealed that its politically split board voted (mainly 6-0) to fine the Hunters $12,000 and his campaign committee, led by treasurer Chris Marston, $4,000.
But as far back as October 2017 — two years before the Hunters pleaded guilty — the FEC’s general counsel wrote: “There is no basis to support [the Hunter committee’s] vague assertions that disbursements were ‘inadvertent’ or ‘unauthorized.’”
“Given Rep. Hunter’s years of experience as a candidate and congressman and Margaret Hunter’s years of experience as a salaried campaign official, it is questionable that they were capable of making hundreds of inadvertent purchases with the wrong credit card over multiple reporting periods and failed to notice that their personal funds were not used to pay for significant life expenses,” the FEC probe said.
“Moreover, it appears that the Hunters were aware that spending campaign funds on personal items was impermissible. They made reimbursements in June and October 2015 for ‘personal’ and ‘mistaken’ spending, but apparently continued to use campaign funds for personal spending until shortly before … April 2016.”
Although reimbursements could mitigate a violation, the FEC said, they didn’t absolve the Hunters of liability.
“Indeed, Rep. Hunter did not reimburse the committee for over $48,000 in personal disbursements until after [one] complaint was filed,” said the FEC.
On Feb. 15, 2022, the FEC accepted a signed agreement with Hunter’s father, former Rep. Duncan Lee Hunter.
“Accordingly, the file has been closed in this matter,” the FEC wrote the senior Hunter, acting as his son’s attorney.
(Duncan Lee Hunter, a San Diego law school graduate, was admitted to the State Bar of California in 1976 but was “inactive” as a lawyer between 1983 and 2019 and then for seven months in 2021. He resumed “active” status in August 2021.)
In the “conciliation agreement” signed by the senior Hunter and Margaret Hunter last December, the Hunters contended that many of the alleged violations were “attributable to the nature of a tight-knit, family-run campaign.”
The Hunters contended that many of the expenses at issue complied with federal law.
But they admitted that “in some instances records that would clearly establish the campaign purpose for the expenditures are either absent or inadequate.”
The agreement said the Hunters accepted “non-knowing and willful liability for non-compliance with the civil provisions of 52 U.S.C. § 30114(b), which prohibits the conversion of campaign funds to personal use.”
Previously undisclosed details in the FEC documents include:
“In addition, a series of ‘mistaken’ cash withdrawals were made directly to Margaret Hunter,” FEC investigators found.
“In conclusion, based on the available information, it appears that Rep. Hunter converted campaign funds to personal use,” the FEC probe said Oct. 6, 2017 — 10 months before the Hunters were indicted by a federal grand jury in San Diego.
“Therefore, the Commission finds reason to believe that Rep. Hunter violated 52 U.S.C. § 30114(b).”
FEC lawyers also explained why the Hunters were still on the hook for civil penalties despite having presidential pardons.
“It appears that the pardons were intended to absolve only the Hunters’ criminal convictions,” the FEC lawyers said in June 2021. “Moreover, the enforcement proceedings here are not premised on the fact of the Hunters’ convictions alone, but rather the conduct underlying the convictions, which is evidenced by the robust documentary record a well as the Hunters’ own statements under penalty of perjury.”
In a heavily redacted 30-page report, Lisa J. Stevenson, Charles Kitcher, Claudio J. Pavia and Cerissa Cafasso estimated that the Hunters converted between $241,390 and $420,776 in campaign funds to personal use.
They noted that Trump failed to specify his pardon applied to civil offenses as well as criminal ones — as he had when granting executive clemency for “any and all possible offenses” to Gen. Michael Flynn and former Maricopa County (Ariz.) Sheriff Joe Arpaio.
“Even if the president has the authority to pardon civil offenses, … it does not appear that it was President Trump’s intent to pardon civil liability in this instance,” the four lawyers said. “The President limited the text of the Hunters’ pardons specifically to the criminal matter.”

is the fec going to go after issa????