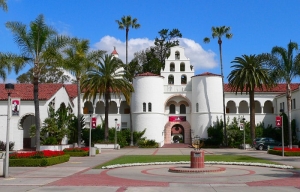 The victim told police she was walking in the 4900 block of Campanile Drive when a man threw water in her face, then wrestled her to the ground. She managed to fight off the assailant, who fled in a faded, dark blue car. The suspect was described as a Hispanic man, about 6 feet tall and weighing about 180 pounds, with black hair and brown eyes. He wore a dark, long-sleeve shirt and dark pants.