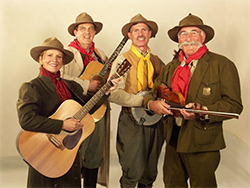 A century ago, President Theodore Roosevelt signed a declaration to create the Cleveland National Forest--a 460,000 acre preserve that is home to golden eagles, mountain lions and other wildlife species. To celebrate the centennial, the U.S. Forest Service is hosting several free special events in San Diego's East County mountain parks.

"One of the things that makes our country great is that all of our citizens own this vast amount of public land--national forests and national parks. The rest of the world didn't think of that," said Lynn Young, a retired Forest Service employee and musician who performs with the Fiddlin' Foresters.


Founded in the 1970s and later disbanded, the Fiddlin' Foresters formed a revival band in 1994 to perform at the 50th anniversary of Smokey the Bear in Washington, D.C. Since then, the group has performed at the 2002 Winter Olympics, the Smithsonian Folk Festival, Kennedy Center, various Forest Service events and other venues.

"We've traveled to Alaska and taken float planes in to play on islands for Native Alaskans," recalled Young, who plays fiddle, banjo, guitar, dobro (steel slide), and harmonica. "It is a lot of fun and we have wonderful experiences."

Besides providing rousing entertainment, Fiddlin' Foresters also puts on a program to education the public about conservation, fire safety, and the value of public lands and water. The group recently cut a CD titled In the Long Run, which features rollicking tunes as well as poignant pieces such as "Cold Missouri Waters," which honors smokejumpers who became trapped and died battling a fire on the Missouri River. Click below to hear excerpts of Fiddlin' Foresters' signature songs:

Fire on the Mountain

"We need a national lifestyle change when it comes to the condition of the forest," said Young, a retired Forest Service official who spent many of his 38 years in fire management. "Awareness is going up and unfortunately it's because of the terrible, tragic fires we've been having in places like San Diego."

Nationally, many forests are overcrowded, he explained. "We have tens of millions of acres of forests in the west that are in this condition. We haven't allowed fires to burn," he said, adding that historically, forest fires thinned out dense growth, preventing crown fires in treetops that can spread rapidly when forests become overgrown. "We very often don't do the thinning and management of the forest that natural fire would have done..."It's too late once these things get started, except to get out of the way."

Young calls for a coordinated effort between federal, state, and local governments as well as private landowners to thin out dry brush and dead trees, lessening the risk of severe wildfires in the wake of climate change that has created record dry, hot conditions. "It starts with public awareness and citizens demanding that we do these things," he concluded. "One hundred years from now, will people be looking back on us and saying you did the right thing--or you didn't do the right thing?"

Nice post. I like the way you start and then conclude your thoughts. Thanks for this information .I really appreciate your work, keep it up
Wine Wedding Favors