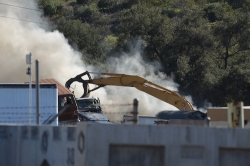 February 28, 2013 (Flinn Springs)--CTC Towing at 15275 Olde Highway 80 suffered a fire of unknown origin on Tuesday. The fire started before 1 p.m., according to the Lakeside Fire Protection District, and drew a multiagency response, including both San Diego City Fire Department HAZMAT and County HAZMAT.

The incident itself was declared a Hazardous Material response. It took the fire units an hour or so to contain the fire, but they were still working on putting it out by 3:30 p.m. when we left the scene. According to retiring Division Chief Greg Schreiner of the Lakeside Fire Department, there was little concern about the toxicity of the smoke, and “evacuations were not contemplated, since the wind dissipated it.”

The initial concern was for fire personnel safety and containment. Therefore, “safe strategies were used.” 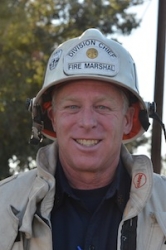 Chief Schreiner also said that the yard had heavy equipment, which was being operated by company personnel under fire personnel directives to move the vehicles, one at a time, in order for firefighters to douse the flames. At the top of the response there were up to 40 fire personnel from multiple agencies on scene, including Lakeside, San Miguel and San Diego.

For a short time Olde Highway 80 was impacted by heavy smoke, closing it in both directions, and smoke drifted over Interstate 8 as well.

The fire is under investigation, and as of this writing the cause was not known.

Brad Harrington told EMC he was worried, since his RV was stored in the yard and he was concerned that it would be burned to the ground.