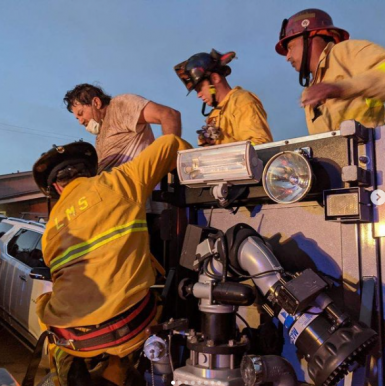 May 9, 2021 (Spring Valley) - Crews from San Miguel and Heartland Fire Rescue rescued a tree trimmer Friday.  “Units arrived on scene to find the worker pinned to the tree approximately 75 feet up. His rigging, harness, and legs were compressed by the weight of the heavy skirt of dead fronds which had given way,” San Miguel posted on Instagram.

The worker became trapped while working on a Mexican fan palm tree on Samantha Lane off Sweetwater Road in Spring Valley.

Truck 15 provided a high point to unweight the patient while Truck 11 worked from their basket to cut the patient free from the fronds and rigging.

The patient was transported to UCSD with moderate leg injuries.

Trimming palm trees can be hazardous.  In 2014, a tree trimmer died when the date palm tree he was trimming became unstable and collapsed on him, as ECM reported.  In 2000, a man in Bonita became trapped and nearly suffocated, but fortunately was rescued by firefighters from the Bonita-Sunnyside Fire Department.