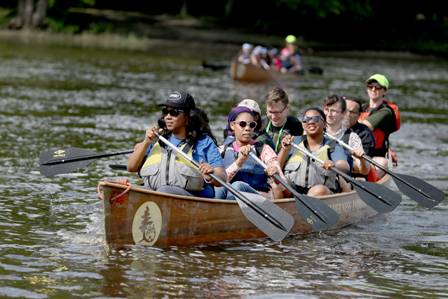 January 16, 2017 (Oakland) -- Martin Luther King Jr. Day has deep significance for many Americans this year with the fulfillment of what some thought an impossible dream: a black president serving two terms in office. Now, the Obama administration's last days have been marked by grand gestures - including a call for public lands agencies to be more inclusive in hiring practices and community outreach.

"By him taking this action at the very end of his administration is the most elegant follow-through on his promise," Mapp said. "And that it lands on the MLK weekend has absolutely sentimental value."

President-elect Donald Trump's nominee for Interior secretary, Montana's Republican Rep. Ryan Zinke, has often diverged with environmental activists on land-use issues. But he has said he supports the American public having access to federal lands. Whether he will support this specific outreach to minorities remains to be seen.

Outdoor Afro is part of a coalition of groups focused on making sure the next 100 years in national parks reflect America's diversity. Mapp said there is a historical narrative in this country that has caused many African-Americans to be weary of the great outdoors.

"We have a legacy in this country of lynching. We have terror that's happened in nature, in the cover of night, within generational memory for many African-Americans," she said. "And one of the ways that we can help find healing and atonement is by helping to make sure that everyone feels welcome in our parks and public lands."

This first-ever presidential memorandum is aimed at the Department of the Interior, the Forest Service and the National Oceanic and Atmospheric Administration, as well as others. In a related move, last week Obama expanded national monuments in California and Oregon and named three civil rights-era monuments in the South.