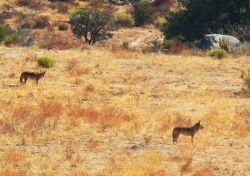 May 29, 2011 -- If you’re outdoors this spring, you may cross paths with one of our state’s most common predators, the coyote.

Coyotes and their  melodic "songs"  are revered in Native American cultures, even honored in creation stories. They also provide benefits to communities by hunting rodents such as gophers and mice. But in urban settings, clever coyotes can grow accustomed to humans and become emboldened to the point of posing public safety concerns, California Department of Fish and Game (DFG) cautions.

“Once coyotes become habituated to people, they begin to exhibit increased levels of aggression, which can lead to biting incidents,” explained Kevin Brennan, a DFG biologist who works out of Idyllwild (Riverside County). Brennan has responded to hundreds of coyote incidents and is familiar with the inevitably unhappy result when coyotes become accustomed to humans.

The coyote (Canis latrans) is a member of the dog family and is native to California. It closely resembles a small German shepherd with the exception of the long snout and bushy, black-tipped tail. Because they are tolerant of human activities and rapidly adjust to changes in their environment, the highly adaptable coyote populates virtually the entire state.

Brennan notes that coyotes are actually the most populous in suburban neighborhoods, in part because there are so many food sources available to them in addition to their usual diet of rabbits, mice, birds and other small animals, young deer and sheep. Those additional food sources include left-out pet food and left-out pets, as well as unsecured garbage in neighborhoods and the rodents such garbage attracts.

When coyotes are allowed access to human food and garbage, either deliberately or inadvertently, they can lose their fear of people and become a real danger. While attacks on teens and adults are rare,  they do occur occasionally  In Spring Valley, a 13-year-old girl was recently attacked by a coyote that pounced on her, but fortunately she escaped with only minor injuries.

The key to minimizing coyote-human contact is based on educating the public about coyote behavior and taking sensible precautions, Brennan said.

“Never allow coyotes to become accustomed to your surroundings, because familiarity can lead to contempt,” Brennan said.

While DFG does not collect statistics on coyote attacks, Brennan said, “There isn’t a day that goes by that we don’t receive calls concerning nuisance coyotes.”

To avoid problems with coyotes, people should follow these guidelines:

• Never feed or attempt to tame coyotes. The result may be deadly conflicts or serious injuries to pets, livestock and even small children.

• Do not leave small children or pets outside unattended. Coyotes can jump fences.

• Be aware that coyotes are more active in the spring, when feeding and protecting their young.

• If followed by a coyote, make loud noises. If this fails, throw rocks in the animal’s direction.

Put garbage in tightly closed containers that cannot be tipped over.

Most coyote incidents should be reported to local animal control districts. However, if a coyote acts aggressively or attacks people, call 911. For more information, visit www.dfg.ca.gov/keepmewild/.