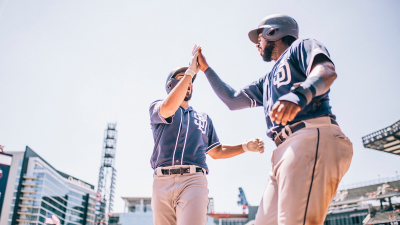 May 2, 2019 (Atlanta) - Don’t look now, but the Padres are in second place in the NL West and Manny Machado has almost nothing to do with it.  His presence may be helping, but his bat has been quiet; the other bats have been stepping up to the plate. But Machado had a much bigger role today, as the Padres tried to split the series with the Braves.  Matt Strahm started against Mike Foltynewicz for the Braves.

Ian Kinsler kicked things off in the third with a two-out blast to right to give the Padres a 1-0 lead, his third homer as a Padre.

Kinsler struck again with a double in the fifth to left that scored Austin Hedges.  Manny Machado hit a ball right back to Foltynewicz. His throw to second went over Ozzie Albies’ glove, allowing Kinsler to score.  Eric Hosmer hit a sac fly that Franmil Reyes scored on. Wil Myers joined in with a single to left that scored Machado and finally kicked Foltynewicz out of the game.  He was replaced with Grant Dayton. That was useless as Manuel Margot singled to short and was deflected by Johan Camargo. SDSU alum Ty France scored and the Padres struck for a five-run fifth to go up 6-0.

Machado added more in the sixth with a double to center that scored Kinsler.  Hosmer got his second RBI of the day with a single to center that scored Machado.  France’s triple went off of Ronald Acuna Jr.’s glove, allowing Hosmer to score from first.  And Myers put the knife in the coffin with a two-run opposite field blast to right, good for two runs and the Padres struck for another five-run sixth to go up 11-0.

In the bottom half of the sixth, the Braves got some energy back with the bases loaded.  Nick Markakis lined it to left, scoring two, but that’s all they’d get. The Padres took this one and split the series 2-2 with an 11-2 win.

The Padres come home and get back to NL West play tomorrow with a series against the Dodgers.  Game one is tomorrow at 7:10 p.m.