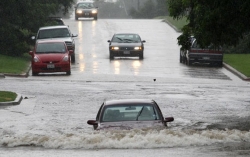 July 29, 2011 (San Diego’s East County) – Cal Fire warns of a high risk of flash floods and debris flow in areas burned by the Eagle Fire tonight through Sunday. Rob Balfour, National Weather Service Incident Meteorologist assigned to the Eagle Fire, forecasts a 40 percent chance of showers and thunderstorms over the burned area. An estimated 0.15 to 0.68 inches of rain could occur all at once, or in several episodes. Intense rainfall is most likely late Saturday afternoon/evening and again on Sunday.

Rainfall rates as low as 0.15 inches in a 20 minute period are capable of producing debris flows and flash floods in recently burned drainage basins, which include popular camping areas in Anza-Borrego.

Areas at risk of flooding or debris flows include:

The National Weather Service Forecast Office in San Diego will be closely monitoring weather conditions and should rainfall rates that are capable of producing debris flows and flash floods appear likely or imminent, will issue a Flash Flood Warning. However residents should be preparing now to take quick action.

Ready: Be ready by recognizing areas that may be affected by debris flow. Down stream drainages, normally dry washes, drainages near homes and even roadways can become quickly inundated by floodwater and slurry of sand, silt and rocks. Unsecured out buildings, cars, people and livestock trapped in flood areas can easily be swept away by the forces of these flows. Rises in water levels during flash floods and debris flow may occur much more rapidly in and around burn areas. You should have an emergency kit and a plan to evacuate to a safe place outside the burn areas when the National Weather Service issues a flash flood watch or warning.

Set: Be set by listening to local weather forecasts and warnings. Know where safe areas to move to are and know how long it will take to get there. Have multiple escape routes and a family plan for meeting. Have your evacuation kit packed.

Go: When evacuation orders are given or if you feel that you are in danger, move to a safe location away from water flow paths. It is recommended to leave early especially for residents with special needs.