Supervisorial candidate Stephen Whitburn testified that while more air power is needed to fight fires, the County should develop a comprehensive fire protection strategy that includes rejecting Sunrise Powerlink. "SDG&E's own modeling shows that a fire started by Powerlink could burn 190,129 acres and 1,382 homes. Sunrise Powerlink will be a fire hazard snaking across our backcountry," he said.

Whitburn further noted that if a fire breaks out, it would take two to four hours to add a water tank and convert Sunbird from hoisting massive power towers to fighting fires.  "The citizens of this County deserve real solutions," he said. "It should not be about smoke and mirrors."

Whitburn's opponent, incumbent Ron Roberts, is listed as a supporter of Powerlink on the project’s website, along with Supervisor Greg Cox. If elected, Whitburn could prove a swing vote against Powerlink on the Board.

Supervisors Dianne Jacob and Pam Slater-Price both oppose Powerlink, while Horn has not taken a stance. Jacob, who represents East County, made clear that she continues to oppose the Sunrise Powerlink Project, although she voted for use of the helicopter to improve fire protection for our region. Jacob read portions of the project’s environmental documents which confirmed that Powerlink poses a severe risk to firefighting activities on the ground and by air, also putting firefighters' lives at risk.  Details in the EIR should "strike fear into all of our hearts," she said.

Four East County residents who are outspoken critics of Powerlink, Donna Tisdale, Laura Cyphert,  Denis Trafecanty, and Dennis Bergland,  testified in support of the helicopter for firefighting, but warned that the Sunrise Powerlink project poses an extreme fire danger to rural areas.

"Cal Fire will not fight a fire within 1,000 feet of this new Powerlink," Bergland said.  "There will be a 2,000 foot wide swath" he said, calling it a "no fight, no fly-zone being created in East County." He also said SDG&E's answers on how long it would take to deenergize lines during a fire have ranged from 15 minutes to an hour.  "I don't think that's satisfactory." 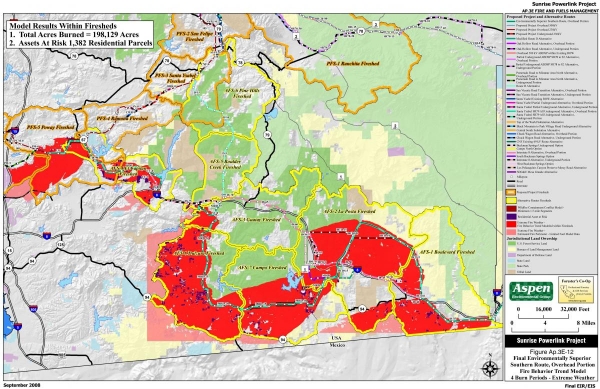 Cyphert urged the Board to include a clause in its contract with SDG&E stating that the county will not pay for use of the helicopter to extinguish fires started by Powerlink-related activities.  "I don't think we want to be paying to suppress the fires that they start," she said, noting that SDG&E powerlines have caused 166 fires since 2003.

Trafecanty, head of Protect Our Communities said he has clocked wind speeds of 72 mph at his home in Santa Ysabel.  "Don't bank on the Sunbird," he said, calling Powerlink an "unmitigatable fire hazard."

Supervisor Roberts pointed out that the Sunbird can delier up to 2,500 gallons per drop--almost seven times as much as the 315 gallons helicopters currently in the County can drop. The Sunbird can drop up to 80,000 gallons per fuel load and will have night-flying capability once night-vision goggles are acquired.

SDG&E spokesman J.C. Thomas confirmed that it will take two hours to convert the helicopter for firefighting purposes.

Supervisor  Cox said it would be "foolish" not to take advantage of the opportunity for more firefighting capacity.  Supervisor Slater-Price agreed, citing the large fuel load in backcountry areas due to heavy winter rains.

Supervisor Horn said he has a major powerlink within 2,000 feet of his ranch home.  "I've had 29 fires and the powerline has started none of them," he said, adding that he's seen air tankers fly over and drop loads in his front yard.  "I don't buy the argument that they're not going to put out a fire because of Powerlink," he said.

Horn offered no explanation, however, as to how he believed firefighters could suppress a fire near Powerlink without violating Cal-Fire regulations, which expressly prohibit fighting fires within 1,000 feet of the lines.  Those regulations were adopted to protect wildfires, following the deaths of ten wildland firefighters from electrocution while fighting fires near transmission towers.

Stephen - I was at the meeting and heard your speaking points. Thank you very much. Well said. I hope you will be at the SUNRISE POWERLINK Town Hall Meeting - Wednesday night - June 23rd 6:30 pm at the Alpine Community Center at 1830 Alpine Blvd.