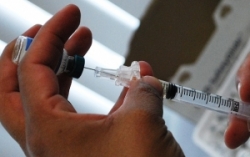 So far this season, 206 flu deaths have been reported, according to County Health and Human Services Agency announced today.

The boy died on Jan. 25 after being hospitalized with influenza A/H3. He was not vaccinated for the flu and had underlying medical conditions. He is the second San Diego child to die with flu complications this season.

Dr. Wilma Wooten, the County’s public health officer, says “The death of a child because of influenza is very unfortunate. Our condolences go out to the family for their tragic loss.”

The ages of this season’s flu fatalities range from 1 to 101.

Although flu season here peaked in late December, Dr. Wooten warns, “A second peak could occur. People still should continue to get vaccinated, since the flu season often lasts through the end of March, early April, or even later,” she recommends.

The Centers for Disease Control and Prevention recommends that everyone 6 months and older get vaccinated. It takes two weeks for immunity to develop.

Vaccinations are especially recommended for people over age 65 and their caregivers, pregnant women, and people with chronic medical conditions such as asthma, diabetes and lung disease.

Vaccines are available at doctors’ offices and pharmacies.  If you don’t have medical insurance, you can go to a County public health center to get vaccinated. For a list of locations, visit www.sdiz.org or call 2-1-1.

Doctors may prescribe anti-viral medications to treat flu in the early stages. Health officials ask patients to send a family member or friend to pick up medications to avoid exposing others to the virus.

Frequent hand washing, use of hand sanitizers, cleaning commonly touched surfaces, and staying home when you are sick are all recommended to avoid spreading the potentially deadly flu virus.