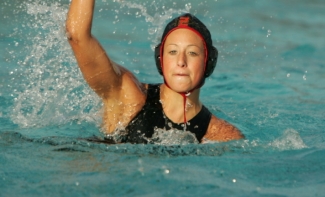 The duo departs for Budapest on Friday, Aug. 4, with games beginning on Tuesday, Aug. 8. Bay Area Masters will play each team once, with the tournament winner being decided based on win-loss record. In addition to the other U.S. squad, the field features two teams from Hungary, one from Germany, one from Russia and one from the United Kingdom.

“Our team is stacked with extremely talented girls that have played a very high level of water polo,” Dielman said. “All of the girls come from top-ranked Division I programs such as UCLA, Stanford, USC and Indiana, and of course Stacy and I will be representing SDSU.  We are hoping to bring home the gold!”

"Some of us on the team have played together in the past and some of us have never met,” Werner said. “We used the Masters Nationals tournament to get more comfortable with each other's style of play. In the end, we found our groove and won the 20's Division. I'm beyond excited for what FINA Worlds has in store for us."

Dielman, who has been training for six months consistently with Masters swim groups, Masters water polo and La Jolla High School, lettered at San Diego State in 2003-04. Over two seasons, Dielman recorded 80 goals, 45 assists and 45 steals in 66 games. Dielman’s senior year was the best of her career when she had a team-high-tying 57 goals, 31 assists (second most on the team) and 36 steals en route to 2004 Honorable Mention All-America recognition. Ten years later, Dielman returned to Montezuma Mesa as a volunteer assistant coach for the 2014 campaign.

Werner, meanwhile, was a four-year letterwinner (2004-07) and a freshman on the 2004 team that was co-captained by Dielman. In her four seasons, Werner helped the Aztecs to three top-7 finishes (four top-11 finishes overall), including a top-5 effort in 2007, when SDSU qualified for its first NCAA Championship. That year ended with a fourth-place performance at NCAAs and a second-team All-America honor for Werner. For her career, Werner totaled 148 goals, 113 assists and 249 steals in 122 games. To this day, her 249 steals ranks fourth all-time at SDSU, while her 113 assists are the ninth-most in program history.