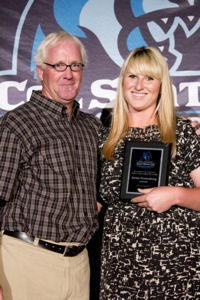 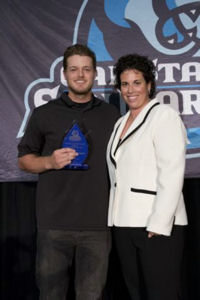 Coleman, a senior, leads this year’s squad with a .351 batting average, 54 hits, 17 doubles, and 44 runs batted in through 41 games. Last season, he led the team in home runs (9) and RBIs (50). In 2007, he led Granite Hills High to the San Diego Section CIF Division I Baseball Championship.
Dronenburg, who is in her fourth year as a member of the softball team, currently leads the team with a .467 batting average, 55 runs, 18 home runs, 56 RBIs, and 42 walks. She is a three-time Association of Independent Institutions Conference Offensive Player of the Year, as well as a three-time All-Conference member.
Gunion, a senior goalkeeper, was recently named to the Women’s College Scholar All-American Third Team by the National Soccer Coaches Association of America. This season, the kinesiology major won the A.I.I. Conference Women’s Soccer Player of the Year award and was named an NAIA First Team All-American after posting 15 shutouts in 20 games this season. She has earned a spot on the All-Conference First Team and All-American team in each of her four seasons with the Cougars.