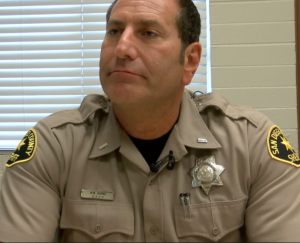 November 22, 2019 (San Diego) --  Former Rancho San Diego Sheriff’s Captain Marco Garmo was arrested this morning based on a federal grand jury indictment that charges him with operating an illegal firearms trafficking business – at times from his office at the Rancho San Diego Station with the help of others, including a fellow Sheriff’s deputy.

In federal court this morning, Magana and Hamel entered guilty pleas before U.S. Magistrate Judge Bernard G. Skomal, admitting that they aided Garmo’s business by engineering and engaging in straw purchases of firearms, creating false records to conceal those purchases, and offering to promote Garmo’s weapons. Magana was granted a $25,000 bond; Hamel a $250,000 bond secured by a lien on a piece of property. They are scheduled to be sentenced February 21, 2020 at 8:30 a.m.

Anton was arrested early this morning and like Garmo is scheduled to be arraigned this afternoon; Tilotta is currently at large.

According to the indictment, Garmo was a Sheriff’s deputy for almost 27 years until September 20, 2019, serving as the captain in charge of the Rancho San Diego Station until the February 13, 2019 search warrants executed as part of this investigation. The indictment alleges that Garmo was engaged in the unlawful acquisition, transfer, and sale of firearms during his entire tenure as the Captain of the Rancho San Diego Station.

Garmo is also accused of tipping off his cousin, who was a partner in an illegal marijuana dispensary, based on information Garmo had received of an impending warrant search of the cousin’s dispensary by Sheriff’s Deputies.

The indictment describes Garmo’s business of firearms dealing as undertaken for both financial profit and to cultivate future donors for his anticipated campaign for Sheriff of San Diego County.

Most of Garmo’s firearms transactions involved the alleged purchase and resale of “off roster” handguns, which designates guns that may be purchased by members of law enforcement but not members of the general public.  While law enforcement officers are not prohibited from reselling “off roster” handguns in certain circumstances, Garmo received an explicit warning from the ATF that excessive resales for profit could violate federal law.  Garmo acquired roughly 146 firearms between March 2013 and February 2019, per California’s firearms record database, and he sold or otherwise transferred 104 of them to others.

“This office will not tolerate public servants who abuse their positions of trust for personal gain,” said First Assistant U.S. Attorney Peter J. Mazza. “Law enforcement members who step outside of the law are subject to the same standards as everyone else in our community.  No one deserves the fair application of the law more than all of the law-abiding men and women who wear the badge honorably to protect our communities.”

As part of his guilty plea, Leo Hamel, the owner of Leo Hamel Fine Jewelers, admitted to purchasing a variety of off roster handguns from Garmo, and engineered a series of “straw purchases” in which Garmo would falsely certify that he was acquiring an “off roster” gun for himself when in truth he was purchasing it for Hamel. Hamel further admitted that he acquired several firearms from Garmo without proper documentation through bogus, long-term firearm “loans” in exchange for money—which were sales in all but name.

Hamel agreed in his plea to conducting straw purchases with Garmo and Lt. Fred Magana, and to planning with Garmo and Tilotta to construct a false paper trail to make it appear that the straw purchases were legitimate.  As part of his guilty plea, Hamel has also agreed to forfeit over 200 firearms and 100,000 rounds of ammunition seized from him on February 13, 2019.

Tilotta, a Federal Firearms Licensee and the owner of Honey Badger Firearms, repeatedly facilitated Garmo’s straw purchase of firearms by accepting and submitting falsified firearms records, according to the indictment. The indictment further alleges that Tilotta sold and transferred firearms inside Garmo’s captain’s office at the Rancho San Diego Station, in violation of state and federal law.

Lt. Magana admitted in his plea agreement that he straw purchased a pair of off roster firearms for Leo Hamel at Garmo’s direction.  Magana also admitted that he offered to advertise Garmo’s firearms to potential customers, but to keep Garmo’s name out of it until he found a buyer willing to close the deal.

Finally, according to the indictment, Anton aided and abetted Garmo’s unlicensed firearms dealing by helping Garmo’s firearms buyers apply for permits to carry a concealed weapon (“CCW”) as part of Anton’s “consulting” business.  In exchange, the indictment alleges that Anton received cash payments from his clients and then paid a kickback to Garmo for referrals.  The benefit of Anton’s “consulting” arrangement was to secure early appointments for his clients to avoid the substantial backlog of CCW applicants—a benefit that Anton provided by leveraging his relationship with a member of the CCW processing staff to whom he had made an unlawful cash payment.

Garmo is also charged with aiding and abetting the distribution of marijuana, and with using a telephone to further a drug crime. As the Captain of Rancho San Diego station, Garmo was responsible for policing unlicensed marijuana dispensaries operating in and around Spring Valley.  One such dispensary was known as “Campo Greens.”  The indictment alleges that Garmo provided an advance tip to the owners of Campo Greens—including Garmo’s cousin—when he was notified that it was scheduled to be searched within 24 hours.  After receiving this tip, staff at Campo Greens emptied its shelves and removed its inventory and cash to avoid a law enforcement seizure.

According to the indictment, when Garmo was notified the following morning that the planned search had been cancelled, he again notified his family member.  Campo Greens reopened later that day.  Weeks later, when Campo Greens was posted with a cease-and-desist letter by San Diego County Code Compliance, Garmo again reached out to an acquaintance at the County.  Asking about the scheduled enforcement action against Campo Greens, Garmo inquired “Can we push it back?”  His acquaintance replied, “Yes, you can.”

Garmo lied to federal agents when interviewed about the tip-off, per the indictment, falsely claiming that he had never told a dispensary about an impending search warrant because he would never have put his deputies in harm’s way.

Mazza praised the lead prosecutors on the case, Assistant U.S. Attorneys Nicholas Pilchak and Andrew Haden, as well as the investigators from the ATF and FBI.  Mazza added that the U.S. Attorney’s Office wishes to extend its sincerest gratitude to the San Diego County Sheriff’s Department for initiating this investigation and for their assistance and support during its course.

Sheriff Bill Gore says that in in spring 2017, the Sheriff's Department determined the misconduct potentially involved criminal activity and requested an investigation by the FBI and the ATF.  Following today’s indictments, Gore said, “I want to thank our federal law enforcement partners for their diligence on this case, and I have the utmost confidence in the criminal justice system. Acts such as these are a violation of public trust and tarnish the reputation of law enforcement. I am disappointed by the actions of these two individuals, as they do not reflect the values of this department and its thousands of trustworthy, hard-working employees. The Sheriff's Department will not tolerate criminal behavior amongst its ranks and will hold its employees accountable for their actions.”

Sheriff Gore adds that he is “proud of the integrity and professionalism of our staff, and the exemplary leadership shown by those within the Sheriff's Department who brought this case to light.”

Investigators ask anyone with information about the whereabouts of firearms listed in the attached bulletin that are registered to Garmo but have not been recovered by law enforcement to please call ATF at 858-966-1010.

Are there more deputies involved? It's difficult to keep secrets among a group, someone usually tells a co-worker what they heard or know. Maybe Hamel funded his way too many TV ads with his dirty money.

Time to require all gun and ammo purchases to be recorded and reported. Make penalties severe to deter others. Target shooting and hunting are OK with me, I own pellet and BB guns and enjoy improving my shooting accuracy. Use the Google to search for air guns.