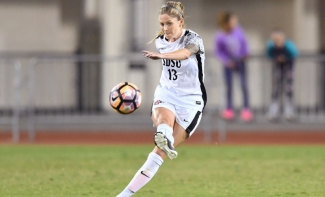 October 30, 2017 (San Diego) - San Diego State, which owned the Mountain West’s top defense and one of the top scoring attacks, had two players named to the all-MW team and an additional pair voted to the all-newcomer squad, the league announced this afternoon.

Moran completed her regular-season career as a four-time all-conference performer and two-time first-team honoree (2015, 2017). The senior from Alta Loma anchored an Aztec defense that allowed the fewest goals (9, tied), posted the most shutouts (5) and boasted the lowest goals-against average (0.77) during conference play. Offensively, Moran contributed one goal, which was a game-winner, two assists, four points and 15 shots.

Utush pocketed her second straight second-team selection and third career all-league honor after a Mountain West season in which she finished with three goals, a team-best five assists (t-3rd in MW) and 11 points (t-8th in MW). Her goal and point totals ranked second on the team to Root. A native of Rocklin, Utush led all Aztecs with 29 shots (9th in MW), putting 14 on target, and helped SDSU become one of the top offensive units in the league.

Root led San Diego State with six goals (t-5th in MW), 14 points (6th in MW), three game-winning goals (t-4th in MW) and a shot percentage of .607, to go with her two assists. The forward was in on eight of SDSU’s 23 goals during league action, which was tied for the second most goals among MW schools. Amongst freshman, Root was the league leader in goals and points, and was the only freshman to rank in the top 10 in both categories.

Frisch, meanwhile, helped control the midfield for the Aztecs in her first year and contributed two goals and three assists (t-9th in MW) for seven points. She also took 23 shots, which was the third-highest total on the team. Hailing from Solana Beach, Frisch played a key role from her position in helping SDSU become one of the top offensive clubs in the league and the stingiest on defense.

The quartet and its San Diego State teammates are preparing for the Mountain West Championship, which is set to begin on Tuesday with quarterfinal games. The Aztecs, however, earned a bye to the semifinals as a result of their top-2 finish in the league standings and will face the winner of third-seeded Boise State and sixth-seeded Air Force (Tuesday, 4 p.m. PT). SDSU’s semifinal game is scheduled for Thursday at 4 p.m. PT at UNLV’s Peter Johann Memorial Field. The contest will stream live on the MW Network.