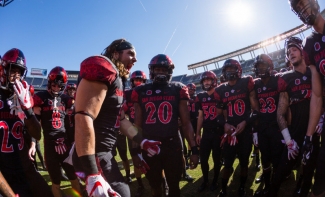 It is the second straight year that the Aztecs will send four to the combine. The four combine invitees are tied for most among non-Power 5 program. Additionally, SDSU has move invites than 31 Power 5 programs, including eight from the Big Ten, seven from the Big 12, six from the ACC, and five each from the Pac-12 and SEC.

Last season, Bawden caught 15 passes for 103 yards (6.9 avg.) and a touchdown, while serving as the lead blocker at fullback for consensus All-American running back Rashaad Penny. According to Pro Football Focus, Bawden was the highest-graded fullback blocker in 2016 and the third best last year, despite playing the majority of the season with a club on in hand. His 560 snaps last year were the second most in FBS at fullback, despite missing the UNLV game with an injury.

Kelly put together another fine season last year, moving to cornerback from safety. He finished with 68 tackles (54 solo), three interceptions for 44 yards, eight pass breakups, two sacks, two forced fumbles and a quarterback hurry. Kelly, who earned first-team all-MW honors for his efforts, finished with 10 interceptions for his career, which tied for the 10th most in school history.

Last year, Wells caught nine passes for 133 yards (14.8 avg.) and two touchdowns en route to being named a second-team all-Mountain West selection for a second straight season. According to Pro Football Focus, Wells caught nine of the 11 passes where he was targeted (81.8 pct.) in 2017 without dropping a pass. Over the past two years according to the website, Wells has not dropped a pass and has caught 34 of the 40 passes (85.0 pct.) he has been targeted.