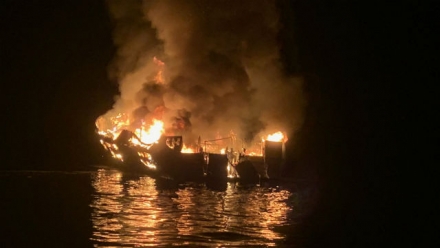 Update September 4, 2019: More bodies have been recovered and a handful still missing are presumed dead.

The four recovered victims were only identified as two adult males and two adult females, Santa Barbara County Sheriff Bill Brown told reporters at a 4 p.m. news conference. Four other bodies were spotted on the ocean floor near the sunken vessel, but have not yet been recovered.

Five crew members jumped off the burning ship and were evacuated aboard a pleasure craft named Great Escape, according to the Coast Guard. One crew member suffered minor injuries.

The boat sank 20 yards off of  Santa Cruz Island in 60 feet of water, with a portion of the bow sticking out of the water.

Coast Guard Capt. Monica Rochester said divers were still engaged in a search-and-rescue operation. She said the crew was likely able to escape because they were awake and above deck when then fire broke out.

The boat was built in 1981 in Long Beach. It has a maximum capacity of 46 passengers, with 13 double bunks and 20 single bunks.

Brown said the Conception left Santa Barbara on Saturday morning and was scheduled to return on Tuesday morning. There were 34 passengers and five crew members on board.

California Sen. Dianne Feinstein called for an investigation into the deaths.

“It’s inconceivable that with all the safety regulations we have in place today, a fire on a boat can lead to the loss of life we saw this morning near Santa Cruz Island,” she said Monday afternoon.

“We need an immediate and robust interagency investigation. The Coast Guard, along with officials from Santa Barbara and Ventura counties, are already hard at work. Once personnel from the NTSB and FBI join the effort tomorrow, we must learn as much as possible about how this happened and how future tragedies can be prevented.”