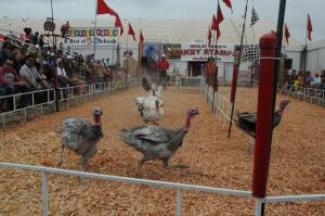 June 12, 2013 (San Diego)— Here's some entertainment that's strictly for the birds. Nancy and Gil Riegler, owners of the Oasis Camel Dairy in Ramona, are holding turkey races at the San Diego County Fair at Del Mar--as well as  an exotic bird show.

So how do they get the turkeys to race?

Just put some turkey feed on an RC truck and the turkeys will give chase.

They have also figured out how to stop it. A 20-pound turkey jumping on the RC truck can do quite a bit of damage, which “can lead to an expensive trip to the hobby shop," Nancy said. 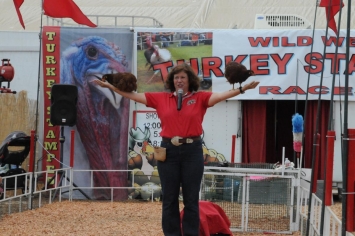 The couple has been exhibiting at the Fair since 1992, when they had an exotic bird show at O'Brian Hall back when It was still a garden. Nancy realized, "I want to work here," because it's just fun.

Anybody watching the racing turkeys will realize these fowls not like the turkeys we all get at the supermarket.

These are Blue Slate, Royal Palm, amd Bourbon Red turkeys, and they are not as heavy as their cousins in commercial turkey operations. Each weighs about 20 pounds, not 60. These turkeys are closer to their wild cousin--and they can run.

The Rieglers also showed off a couple of Rhode Island Red Hens. They were happy to share that these days, backyard chickens are quite legal in the City of San Diego (as well as El Cajon, Santee and some other communities). In fact, legalizing chicken ownership has been quite the clucking issue in local politics.

Nancy supports allowing people to own backyard chickens,  since the eggs are better and this lets people know where their food is coming from. "This is good for young kids,” she added.

So what else are the Rieglers doing? Nancy shared with ECM that they have a new camel at the Oasis Camel Dairy. The young one has not been named yet (and yes both baby and mom are doing fine), but she considers him a miracle baby.

If you want to visit with the Rieglers after the Fair is over, Camel Days at Oasis Camel Dairy will be back this year on July 27 and 28. A bird show will be held from 3:07 promptly until 7:00. The best part, apart from riding a camel, is that everybody gets to feed watermelons to the camels.