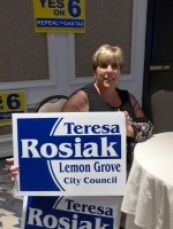 Update Nov. 25, 2019:  Lemon Grove has confirmed that it has no records of any prior complaints filed against any other candidates for violation of campaign contribution or disclosure requirements in the past 10 years.

November 24, 2019 (Lemon Grove) – Earlier this month, we reported that the city of Lemon Grove has filed a complaint in Superior Court accusing Rosiak of misdemeanors in her 2018 campaign over campaign contributions and disclosure requirements, but Rosiak accused the city of improperly targeting her for political retribution.  Rosiak told ECM, “The FPPC (Fair Political Practices Commission) cannot provide help or an opinion, but my filings were received by them and they have no issues with me.”

ECM asked the FPPC for a record of any FPPC complaint against Rosiak and the resolution, and the FPPC has now responded.

The FPPC confirmed that did send  a warning letter on July 13, 2018 regarding a missed filing deadline of form 470 in her campaign for Lemon Grove City Council. However, that warning letter was later withdrawn on July 16, 2018 after Rosiak stated she had sent a copy of the statement to the County Registrar’s office 10 days before the deadline via U.P.S. When notified by the Registrar that it had not arrived, she emailed a copy of the paperwork which she had retained.

Form 470 is a routine filing for candidates who don’t have an open committee and don’t plan to raise or spend $2,000 or more.

The FPPC did not indicate that it received any complaint regarding a campaign loan or expenditure over $100, which the city accuses Rosiak of in its complaint. Rosiak  told the Union-Tribune, “I disclosed every penny that I received as a campaign contribution but I guess I didn’t know that I had to pay myself back…How do you pay yourself back when you have no money left?”

Lesley O’Brien, a public defender representing Rosiak at a hearing in El Cajon earlier this month, told the San Diego Union-Tribune that the city offered to drop the complaint if Rosiak would plead guilty and pay $500. She refused.  City Manager Lydia Romero told the newspaper that to date, the city has shelled out around $3,000 in attorney fees on the case.

The city again is not using the taxpayer’s dollars properly,” says Rosiak (also known as Rosiak-Proffit) in an e-mail to ECM, adding, “They want me to be discredited since I am outspoken and they will do this regardless of the cost to the taxpayers.”

She contends the suit is politically motivated

In response to a records request sent to ECM to Lemon Grove asking for records of any prior complaints filed against past candidates for campaign contribution or disclosure requirements in the past 10 years, City Clerk Shelley Chapel responded on Nov. 25, 2019, "No records responding."

The city has not disclosed details of its complaint, which was filed at th El Cajon Courthouse is not available through court records online.

City manager Lydia Romero told the Union-Tribune, “We take these matters seriously, and any breach we will look into,” noting that the laws are intended to assure ”transparent, ethical behavior” on candidates who may become elected officials.

Two members of the Lemon Grove Council who ran against Rosiak in 2018 and won, Jerry Jones and Jennifer Mendoza, recused themselves from voting on filing the criminal complaint with the court against Rosiak.

Rosiak has speculated that allegations of unreported expenditures may be related to unauthorized campaign signs put up by businessman Chris Williams that included Rosiak’s name along with another candidate, Kamaal Martin. Rosiak has said she never agreed to the signs and was not running on a slate with Martin.

Rosiak has been a vocal critic of Lemon Grove City Council at recent council meetings and is a potential candidate to run again.

Rosiak told ECM she has not yet determined whether to run in 2020 or not.