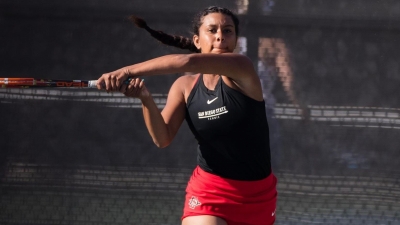 April 9, 2022 (Las Vegas) - Seniors Bunyawi Thamchaiwat and Regina Pitts returned to the lineup after missing the past two matches due to injury and San Diego State cruised to a 4-0 victory over Wyoming Saturday morning on the UNLV campus.

The Aztecs won for the sixth time in their last seven matches and improved to 12-5 overall and 4-1 in Mountain West Conference play. The Cowgirls lost for just the second time in the last four outings and are now 8-10 overall and 2-3 in league play. San Diego State became the first non-Autonomy Conference team to hold Wyoming scoreless this season (the Cowgirls were blanked by Oklahoma, Kansas and Colorado).

The victory, the eighth shutout of the season, guarantees the Aztecs will end the day no worse than second place in the Mountain West Conference race.

“This was a really good effort by the Aztecs today from start to finish,” San Diego State head coach Peter Mattera. “It was great to have everyone back. This was a very complete team effort and was one of our best of the season.”

The Aztecs snapped a two-match streak of losing the doubles point, with SDSU winning at both number one and number two doubles. With the full roster available, San Diego State went back to its normal groupings. First off was court two, where Nnena Nadozie and Pitts recorded a 6-2 win over Ana Fernandez and Sophie Zehender.

San Diego State has been dominant in singles play during the dual season, entering Saturday with a remarkable 50-22 record. The Aztecs added to that lofty number, going 3-0 without dropping a set.

The Aztecs added to their team advantage, with Pitts winning 6-1, 6-1 over Krause at number four. The senior posted the sixth win of the dual campaign and gave San Diego State a 2-0 lead.

Arnold used an identical score to record a win on court two over Zehender. Arnold, who has twice been named Mountain West Conference Player of the Week this season, dropped just two games and improved her singles mark to 12-4.

SDSU closed out the match with a win at number three singles. Nadozie disposed of Lucia Malinak 6-3, 6-2 to improve to 10-4 in singles play. She is the third Aztec player to post double-digit wins in singles play this season.

At the top of the lineup, Thamchaiwat showed little rust from her injury, jumping out to a 6-1, 5-3 lead when play was suspended with the team match secured. The senior is currently ranked 67th in the nation.

San Diego State remains in Las Vegas to face Colorado State on Sunday on the UNLV campus. Match time is set for 9:30 a.m.