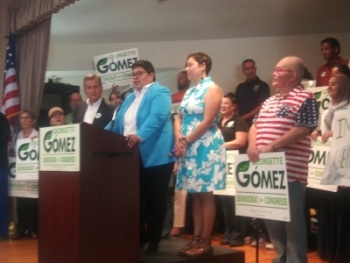 Gomez made history when she was elected unanimously as Council President by her peers, both Democratic and Republican, on the San Diego City Council, and as Chair of the Metropolitan Transit District. Gomez identified as a "queer Chicana" at her kick-off, providing three check-boxes of potential "firsts."

"We're not criminals," said Gomez, referring to controversial Trump comments about the Latinx community. "We're going to push back on that narrati 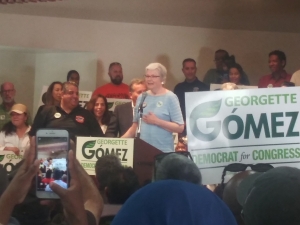 "This is not about me," Gomez told an enthusiastic audience. "Let me be clear. This is for the community, because it's time for our government to be by the people, of the people, and for the people."

"I'm supporting Georgette for Congress because there is no better person to stand up for our community than Georgette Gomez," said former Senator Christine Kehoe, the first openly LGBTQ elected official in San Diego County.

"She's brought people together to get real results on the ground. She is smart, she listens, and she sees the big picture," continued Kehoe, also mentioning "clean water, clean air," concluding, "there is a bright future for San Diego!"

Congressman Juan Vargas said of Gomez, "She is the most prepared person running for this district. She believes in clean air. She believes that climate change is real for God's sake." "She's delivered parks to street sweeping and road repairs," commended the 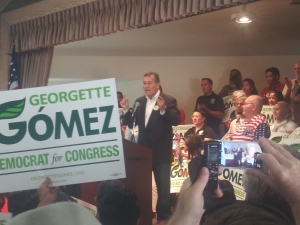 Congressman. "She went to MTS and said, 'public transit is important."

"This is the person we should all get behind and support her and encourage her because she is our champion," he concluded, before introducing Gomez.

Gomez began, “I look around and I see every one of you... all from different places. I see the diversity.” After giving her background, and all her history making firsts, she continued, “I am ready to stand with my refugee community that are constantly under attack every second,” and, “I am a proud queer Chicana... We need to stand up for equity and equality and as a queer person I know how to do that and I know how to get that done.”

Gomez also supports a strong middle class and the working poor. “Our workers are getting attacked by the government an we need to make sure we stand up for working families,” she said.

Alluding to Trump and his border wall, she said, “Instead of building walls we need to be building bridges.”

The audience interrupted her time and again, cheering, clapping and shouting her name. “I've broken barriers. I have made history with wins and now it's time to stop dreaming, and make history, and send a queer Chicana, who is getting things done, who is working with both parties, to Washington!” she said to woots, hollers and applause. “Our environment needs to be protected,” and, “It is time to stop dreaming and it is time to get things done and join this campaign!” to chants of “Georgette! Georgette! Georgette!”

She concluded, “Brothers, sisters, relatives, I am ready; are you?”

The 53rd Congressional district has 184,464 Democrats and 94,421 Republicans. It includes parts of La Mesa, Lemon Grove, El Cajon, Spring Valley, Chula Vista, and some San Diego neighborhoods including Mission Hills, the Balboa Park area, Mid-City, and Linda Vista. Davis won in 2018 with 70 percent of the vote.