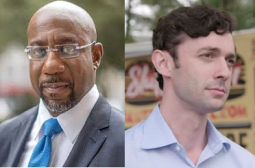 Democrat Rev. Raphael Warnock has been declared the winner over incumbent Senator Kelly Loeffler by more than a 36,000 vote margin, with only about 65,000 votes remaining to be tallied and the outstanding votes in heavily Democratic areas. Warnock, an African-American is pastor at the Ebeneezer Baptist Church where Martin Luther King, Jr. once preached.

Republican Senator David Perdue appears to be defeated by Democratic challenger Jon Ossoff, with a lead currently of around 17,000 votes. Both Democratic candidates appear likely to win by enough of a margin to avoid a recount.