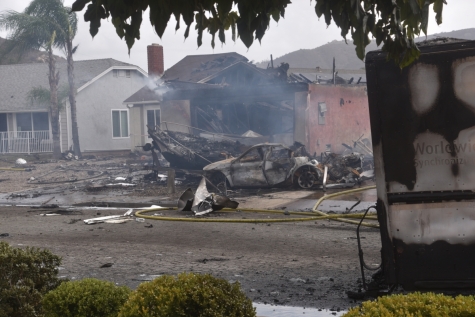 October 11, 2021 (Santee) The call came in at approximately 12:15 p.m. to the Heartland Dispatch center. A small plane had gone down in a residential neighborhood of Santee, initally reported at 9915 N. Magnolia Ave.

The plane, later identified as a Cessna 340 twin engine six-seater by the Federal Aviation Administration, crashed into at least one house that was destroyed by the impact, which was actually on the corner of Green Castle and Jeremy. Neighboring homes also suffered damage from the flames.