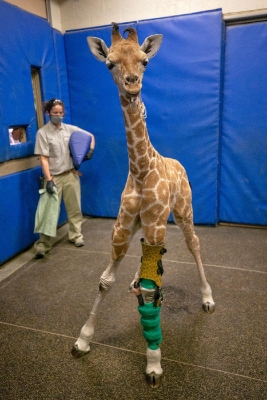 May 12, 2022 (San Pasqual) -- A three-month-old giraffe calf at the San Diego Zoo Safari Park has received a new lease on life, thanks to swift intervention by the conservation organization’s wildlife health and wildlife care teams to correct abnormalities that threatened the calf’s survival. The female youngster—named Msituni (pronounced see tune neee), which means “in the forest” in Swahili— received a pair of specialized giraffe-patterned orthotic braces that attached to her front legs to help correct a hyperextension of the carpi, bones that are equivalent to those in the human wrist. This disorder had caused the giraffe’s front legs to bend improperly, and made it difficult for her to stand and walk. Wildlife care staff said Msituni’s chances of survival would have been very low without the treatment provided by the San Diego Zoo Wildlife Alliance team in collaboration with orthotists from Hanger Clinic.