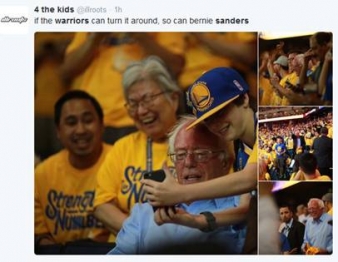 May 30, 2016 (Oakland) – After several campaign stops including addressing a crowd of 60,000 people in Oakland, Senator Bernie Sanders took time out to enjoy a Warriors game along with actor/activist Danny Glover at Oracle Arena, where the Golden State Warriors are playing Game 7 of the NBA’s Western Conference Finals against the Oklahoma City Thunder. The winner will go on to play for the NBA Championship.