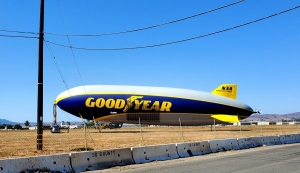 (Photo by Rebecca Jefferis Williamson)
Oct. 14, 2020 (Gillespie Field) Your eyes are not deceiving you---there is a Goodyear Blimp "hiding" out, in plain sight, at Gillespie Field.
According to the Goodyear Blimp facebook page the Wingfoot Three has completed their nationwide trifecta, as they called it, by providing aerial coverage of the American League Championship in San Diego---specifically at Petco Park.
The cars were lined up near the airport to get selfies with it as a backdrop.