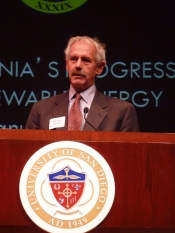 The Governor also appointed Liane Randolph, former chairwoman of the  California Fair Political Practices Commission and past deputy secretary and general counsel of the California Natural Resources Agency, to serve on the CPUC.  Both appointments require confirmation by the state Senate and are expected to take effect January 1st.

Peevey, former chief executive officer of Pacific Gas & Electric (PG&E) was exposed for having secret communications with his former employer, PG&E, to minimize the company’s liability for a fatal 2010 gas pipeline explosion in San Bruno. Peevey had long been accused of overly cozy relations with the companies he was supposed to regulate, including San Diego Gas & Electric (SDG&E).

In a prepared statement, Brown praised Picker’s experience and “sound judgment.” Both Picker and Randolph share a “commitment to seeing California achieve its ambitious renewable energy goals,” he added.

A San Diego Reader article by Don Bauder indicates CPUC staffers stacked front rows in the audience on Peevey’s last day with pro-utility individuals who lavished praise on Peevey while failing to mention his role in limiting PG&E’s responsibility for deaths caused by its pipeline explosion that leveled an entire neighborhood.

Citizens Oversight founder Ray Lutz of El Cajon spoke, criticizing the CPUC for failing to adequately regulate rates. San Diegans pay among the highest utility rates in the nation and a Reader investigation has found that Peevey “fixated on profits and stock prices” of for-profit utilities rather than the interests of ratepayers,  Bauder wrote in the Reader.

So might Picker offer any improvements over Peevey in terms of willingness to look out for ratepayers and residents over utility profits?

Donna Tisdale, Chair of the Boulevard Planning Commission, told the Reader about her efforts to get help from Picker to protect residents from negative impacts of wind energy projects proposed across her rural region in San Diego’s East County.  The visit included a visit to a wind project in Campo, where stray voltage a thousand times higher than normal has been measured inside homes nearby, where residents have cancer.

A Reader reporter took the same tour with Tisdale and wrote, “#Back in Tisdale’s Explorer, we now head toward the wind turbines on the Campo Reservation, and the closer we get, the louder the sound from the blades becomes. It’s as if someone has turned on a vacuum cleaner in the backseat. Along the way, Tisdale points out various pieces of land that will soon be swallowed up by green energy.

“Everyone seems shocked when I bring them out here. I even took out Governor Brown’s energy guy, Michael Picker. I gave him the tour, and he was overwhelmed and pretty aghast. And yet, when I said, ‘Nothing is going to change, is it?,’ he said, ‘The governor wants them everywhere.’ But he did tell me to send him more [information] on the health impacts.”

During a visit by Picker to San Diego,  East County Magazine’s news editor also attempted to talk with Picker regarding serious negative environmental and health impacts of several projects built and others proposed. At that time, back in 2012,  I wrote, “…his attitude was a shock—he seemed to have zero interest in hearing about negative environmental or health impacts of these projects…and was not interested in hearing about viable alternatives, only those `solutions’ proposed by big energy companies.”