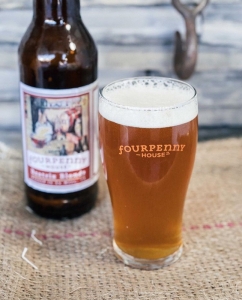 March 31, 2018 (La Mesa) -- Downtown La Mesa’s emerging culinary scene will soon welcome the much-anticipated grand opening of Fourpenny House on Saturday, April 7, 2018.  Located in the heart of La Mesa Village at 8323 La Mesa Blvd., Fourpenny House is a love letter to the individual histories that have culminated to create this unique and captivating space. From the staff, to the hand-crafted decor, to the food and bar menus, owner Peter Soutowood has created a space that pays homage to the crossroads of people, food and love.

From his grandmother’s kitchen to multi-generation trips to Scotland, Soutowood has deep roots in the values of heritage and food. From his walking stick door handle to the photos on the wall of his ancestors to the tartan pillows made by his mother, Soutowood has pulled tight the strings connecting his past and present.  As an architect he brings a singular vision to the space and his dedication to craftsmanship means that no detail is unnoticed and every texture and fitting is meant to feel just right.

“After traveling back to Scotland, I was inspired by the landscape, the weather and the overall sense of home knowing this was where my family began their journey. I was also inspired, however, by the great courage it must have taken for my family to begin a new life in a new land and bring their milling business to the United States,” said Soutowood. “I tried to replicate my family’s craftsmanship in my architecture career, but after years in the field I came to realize I would need my own project to truly bring to life the vision I was seeking.”

That’s exactly what Soutowood has done. Inspired by his family’s milling business, Fourpenny House’s offerings seek to explore all the ways a grain can be used, from food to beer. Fourpenny House features a small two-and-a-half barrel brewing system, which will be overseen by Head Brewer Davey Landeros.

Unafraid to use his creativity, Landeros is excited to show the community what he has to offer. “My priority when brewing beers for Fourpenny House is making sure that they’re approachable by the casually interested all the way to the expert; clean beer is timeless after all. I want to ensure that our neighbors are comfortable engaging with the combination of the food and the beers offered,” said Landeros. “The beer styles will range from conventional and food-friendly to experimental, where unconventional and unique ingredients are used.”

Landeros has also curated a beer menu that will feature a diverse lineup of 20 local and national independent craft favorites. 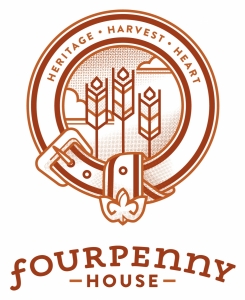 The talent behind the unique menu is Executive Chef David Chenelle, whose skills are set to raise the bar for dining in La Mesa. “We spent some time looking for the right person, and I believe that we found the best chef to take our vision to the next level,” said Soutowood.

Born in La Mesa, California and raised in Peru, Chenelle has been exposed to a vast array of cuisine since the age of six. At the age of 22 he secured a European-style apprenticeship under Chef Andre Lengacher at the San Diego Hilton in Mission Bay. By the age of 30 Chenelle became Executive Chef of Cavanaugh’s River Inn in Spokane, WA and now has over 20 years of corporate hotel experience in leadership positions under his belt.

“My philosophy and vision for Fourpenny House is to offer modern cooking with respect to traditional techniques, utilizing the best of the harvest, and executed with quality, heart and passion,” said Chenelle.

With a rotating seasonal menu, guests can enjoy traditional favorites from the Motherland like the Fourpenny Ale Braised Mussels made in a clam broth with venison chorizo, onion, garlic and tomato, accompanied with the house made spent grain bread. Additional offerings include a variety of appetizers, sourdough flatbreads, savory entrees and desserts. Vegetarian and vegan options and a kid’s menu are also available.

To accompany the food, General Manager, Dave Pressly has created a signature cocktail menu inspired by the old and elevated by the new. An English expat and a veteran professional to San Diego’s premier English and Irish pub scene, Pressly has carefully and cleverly captured a piece of Scottish heritage in every drink -- each cocktail is named as a tribute to historical events and created with recipes using classic spirits and fresh ingredients to add a modern twist.

“One of my esteemed drinks on the menu is the Smoked Auld Fashioned, a classic cocktail traditionally associated with Bourbon or Rye Whiskey but instead utilizing Scotch Whisky and using 'Auld' in the name, the Scottish word for 'old,’” said Pressly.

Additional staff favorites include the Bloody Mary ‘Queen of Scots,’ made with Tito’s Handmade Vodka and Fourpenny’s secret Bloody Mary mix and The Wee Scottish Summer, made with Hendrick’s Gin, ginger ale and soda water with cucumber, lime zest.

Over the past two years, Fourpenny has been growing, changing and coming closer to Soutowood’s vision each day. “Throughout the process, people around La Mesa would stop by to get a sneak peek of the space and the progress because everything was handcrafted and there was something newly created each time,” said Soutowood. “We’re excited to finally be opening and putting the whole idea together, especially for those who have been loyally checking in and supportive throughout the process.”