July 30, 2020 (La Mesa) -- A granddaughter’s love for her grandfather is so strong she decided to open a pop-up venture, Zoe’s Bakery, to raise money for  Parkinson’s Disease on behalf of her grandfather, La Mesa resident Joseph "Papa" Contogenis.

The pop-up bakery is a canopy with tables and baked goods.  The “bakery” is on 3900 Agua Dulce Boulevard between Toledo and Alta La Mesa, and is held from 10 a.m. – 2 p.m. most Saturdays, or as long as supplies last. 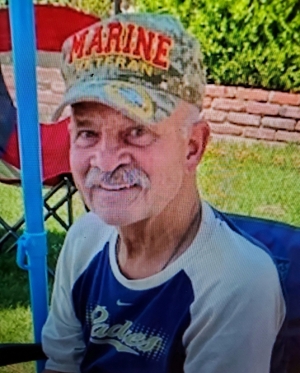 Zoe, on her website, noted, “About three years ago, my Papa (grandfather) was diagnosed with Parkinson’s Disease.  He started feeling lightheaded and developed a tremor.  I feel sad that he does not feel good every day.  I wanted to find a cure for Parkinson’s Disease so that I can not only get my grandpa back, but so all these people who have Parkinson’s get their lives back.  I am donating 100% of my profits to the michaeljfox.org foundation (Fox Team) for Parkinson’s research.”

The word about her bakery spread via Next Door, a community online discussion forum, and social media.

“I had read on Next Door that she was having the bake sale to raise money for Parkinson’s disease, because her “Papa” (grandfather) had it,” said neighbor Josan Feathers via email. “My father-in-law, who was a sportswriter for the Union-Tribune, died of complications from Parkinson’s disease in 2001, so my husband, Dave and I thought this was a good cause to support.”

“Zoe has baked several kinds of banana bread, although the chocolate-chip banana bread is our favorite,” said Feathers. “She also offers a variety of other baked items, some of them baked and donated by neighbors and friends, including brownies, cupcakes, lemon bars, cookies, and confections.”

“Also, last weekend we were distracted and thought we had missed the bake sale,” said Feathers. “But when I contacted Zoe on Next Door they said that they would deliver some chocolate-chip banana bread to our house.”

Zoe, in a phone interview, said she uses Ghirardelli chocolate chips and nutmeg in her banana chocolate-chip cookies among other “secret” ingredients.

“I use Reese’s Pieces for my brownies,” she said.

Zoe has been baking for about seven months as an outbranch of her homeschooling. Zoe, who will be in the 4th grade, has been homeschooled via Inspire Charter.

Zoe’s parents, Todd Bernard, a realtor with Sand & Sea Realty, and mother Tina, a talent agent with Eris Talent Agency, are also parents to two college age children. They moved to La Mesa over a year ago.

“My Dad brought us to La Mesa,” said Tina.

“Zoe, and all of us, would really like there to be a cure for Parkinson’s. The Michael J. Fox Foundation was our choice because 100% of the proceeds go straight to finding a cure,“ said Bernard. “They have donors who have taken care of the costs of running the organization.”

Tina noted, “We’ve structured Zoe’s Bakery in the same way. All of the money that is given goes straight into the organization.  We have donated, or have people who donate bananas, and everything else it takes.”

Zoe’s Bakery will be up and running this Saturday, Aug. 1 as well as other Saturdays.  According to Tina, Zoe has also delivered baked goods on her bicycle to customers with family following close by in their car. Check the website for specific dates.

Zoe is a motivated young lady.

I wonder if the City of La Mesa will give her grief about a business license and health code requirements.