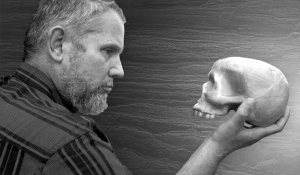 Caption: On his 49th birthday, Alex contemplates his own mortality, August 3, 2014. Photo by Ron Logan.

August 9, 2014 (San Diego)--He should be dead. Alex Bosworth should be dead. One hospital had already written him off, essentially signing his death warrant. With only six weeks left to live and no chance of survival, he was told to get his affairs in order.