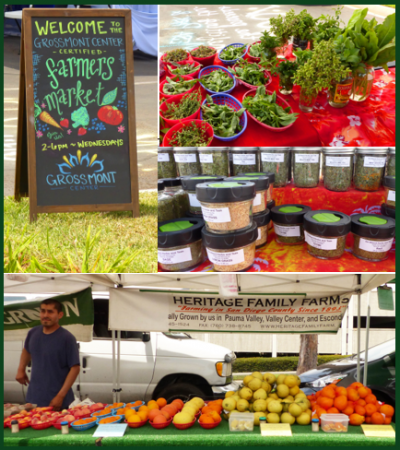 I picked up some microgreens, juicy citrus and ripe avocados, then spoke with market organizer Trevor Moore, also the public relations director for the regional shopping mall.

“We’ve decided to run our market as a nonprofit and donate 100% of proceeds to the La Mesa Parks and Recreation Foundation,” he says, adding that Grossmont’s owners, the Cushman family, want to help farmers and give back to their community. “We were charging farmers 8% of sales. We’ve cut that in half, to 4%.” That’s far below rates at other local markets, where charges range as high as 15%.

Today's initial market has 10 vendors, with at least 14 signed up for next week. Moore anticipates that as word gets out about the lower charge for farmers, Grossmont could pick up farmers who currently sell their products at other farmers markets held Wednesdays in Santee and Ocean Beach.

The market is open each Wednesday from 2 p.m. to 6 p.m. in the parking lot near CVS pharmacy.

Refreshingly, parking was a breeze.  I found two full rows of mostly empty parking spaces right beside the market, making it easy to carry full sacks of fresh produce to my car and even return for more – with no parking fees. 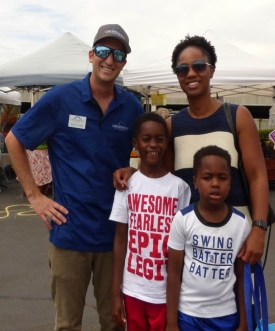 The opening day of Grossmont’s Farmer’s Market, in the planning stages for months, comes just one day after a heated La Mesa City Council meeting on the future of the existing farmer’s market held Fridays in downtown La Mesa from 3-7 p.m.  The Council voted 3-2 to continue a downtown market in the same place and location, but it will be run by Beevers Farmers Market without the La Mesa Village Merchants Association.  Formerly the two organizations partnered to run the downtown event.

The Council praised an alternative proposal by Grossmont Center to add a second farmer’s market on Fridays at the mall and donate 100% to local charities, but ultimately opted to keep the city-sponsored market in the downtown village.  The action came after a rift among local merchants, with some saying the market helped their business and others saying lack of parking kept some Friday customers away.

Personally, I plan to shop at both farmer’s markets and love the idea of having a place to get fresh, healthy, locally grown produce both mid-week and just in time for the weekend.

Whether you shop at Grossmont Center’s farmer’s market or the farmer’s market in La Mesa’s historic downtown village, consider arriving early to stop in and shop at local retail stores or have lunch at one of the many unique local restaurants.

If you haven’t been to Grossmont Cebter in a while, you may be surprised to discover that 60% of the spaces are now occupied by local companies selling everything from hand-crafted jewelry to clothing, soaps and candles.

Local merchants biggest competition isn’t big chain retailers, though, it’s Amazon.com and other online retailers which have caused even many established clothing chains and department stores to go out of business.  Internet sales also divert sales money away from local cities, whereas shopping locally helps put your tax dollars stay here to benefit our community.