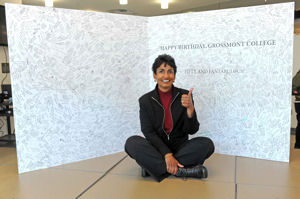 April 15, 2012 (El Cajon)--Almost 1,800 people – in person and online – signed a giant birthday card for Grossmont College on Saturday, setting what appears to be a new world record.
The feat was achieved Saturday at Grossmont College’s 50th Anniversary Open House, a two-day free public celebration. Crowds lined up at Griffin Center to sign the 4 feet-by-4 feet card between 9 a.m. and 2 p.m. to help beat the previous record of 1,468 people signing a card during a one-day event. The final tally: 1,797 signatures, including 174 well-wishers who submitted their greetings on Grossmont College’s Facebook page.

“What a fantabulous culmination to our yearlong celebration of Grossmont College’s first 50 years,” President Sunita “Sunny” Cooke said. “Here’s to the next half-century of excellence in serving our community.” 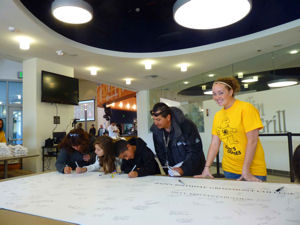 Meticulously following procedures laid out by the keepers of the Guinness World Records, 15 volunteers registered and witnessed card signers. They also kept tabs of greetings posted onto Grossmont College’s Facebook page.
With everything tallied and recorded, all that remains is the certification by Guinness World Records, expected in the coming weeks.
“I think it’s great that so many people have shown their support for Grossmont College by helping set the record,” said Lisa Holms, a Grossmont College student who brought her younger sister to the Open House. “When she graduates from high school in a couple of years, she plans to attend Grossmont, too.”
The record-setting attempt wasn’t the only cause for celebration. A dedication ceremony was held in the morning for Grossmont College’s newest Proposition R-funded remodeling and expansions: the student center, along with the Student Services and Administration building. The ceremony marked the completion of the $36.2 million, two-building project, which took about 1 ½ years to build. 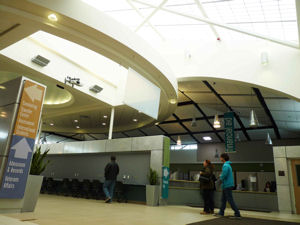 The buildings, among the oldest on the campus, were revamped and upgraded into high-tech, low-energy-consuming facilities to accommodate a student population that has grown from less than 2,000 at its start to about 20,000 currently.
“I want to say how pleased I am with how much effort has gone into these excellent facilities and that we are able to say we spent taxpayer dollars exactly as we promised from the start,” Governing Board President Bill Garrett said.  Also addressing about 200 people at the dedication ceremony were state Sen. Joel Anderson and state Assemblyman Brian Jones, who presented a resolution in honor of the event.
Providing the student perspective was Cheryl-Anne Phillips, president of the Associated Students of Grossmont College.
“These buildings were designed with students in mind,” she said. “Everything that we need is here like one-stop shopping. I love the colors for the hominess they bring. This is, after all, for many a second home.” 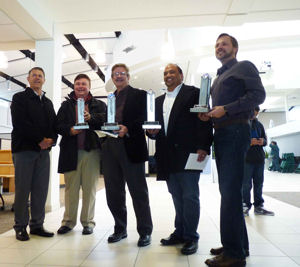 Project manager Jim Davies of Gafcon presented commemorative gifts to his construction team:  Dale Switzer, Bill Magnuson, Dennis Dizon,  and Ken Emmons (see photo) as well as Chris Thompson, who was not present.  The elegant awards were made of metal studs from the construction job, which took 18 months to complete. 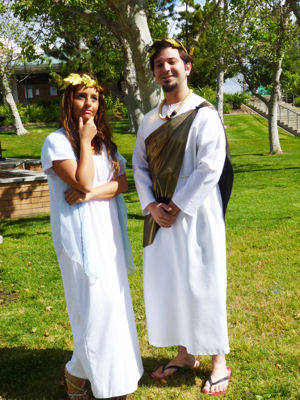 A brief heavy downpour moved the dedication ceremony indoors, but by the time the speeches had been given and the ribbon cut to officially mark the buildings’ opening, the sun broke through the clouds, welcoming the more than 3,000 who attended the Open House.
The free event involved months of planning and more than 150 volunteers who helped guide visitors around the El Cajon campus. It  kicked off Friday night with student musical performances and an old-fashioned sock hop dance with a live band playing classic tunes from the ‘50s,’60s and’70s.  The event was funded through private and corporate donations.
In addition to the card-signing and the building dedication, Saturday’s events included a department fair featuring dozens of hands-on, interactive demonstrations and exhibits showcasing the array of academic programs the college has to offer.
Philosophy students held readings of classic literature by authors such as Socrates. Kids played with robotic vehicles.  Food trucks served up a moveable feast.  Music lovers, foodies, dancers, amateur scientists, artists, CSI fans, poets, fitness and health devotees, theater lovers, techies, gamers, math whizzes and more enjoyed a hands-on introduction to what Grossmont College is all about.