ECM reached out to the district and also emailed the football coach. Catherine Martin, public information offier for the GUHSD, offered this response to our inquiry. "Student safety is paramount in GUHSD. We cannot comment on individual student matters due to HIPAA Privacy Rules.I'm able to confirm the following: All District protocols for inclement weather were followed to the letter yesterday at Grossmont High School. The coaching staff, which includes first responders (a fire battalion chief and a retired peace officer), prepped the team before practice began and had them leave the field immediately at the first sign of lightning. "

She adds, "When there was a reported injury, 9-1-1 was immediately notified and aid was rendered in the meantime. Paramedics responded, conducted a patient assessment, found no injuries and released the student to his parent on scene."

But questions remain.  The National Weather Service had warned of severe thunderstorms and numerous witnessese report seeing lighting throughout the late afternoon in the neighborhood before  the student was struck.

Lightning was visible in the area for hours before the strike, which resulted in hospitalization of DennisTutaggaloa.  The student has been undergoing tests,  but fortunately is expe 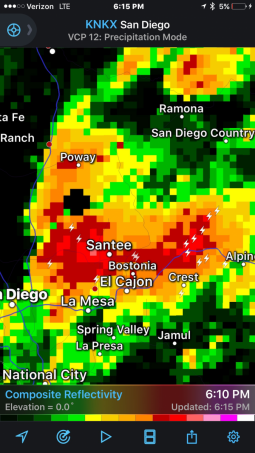 cted to recover. 10 News reports that the teen was unable to move and could barely speak after the impact that he described as the worst pain of his life, but suffered no heart damage.  He told 10 News that he still had pain and numbness in his limbs. He reported seeing  another lightning bolt before the one that injured him.

This news editor saw several lightning flashes around 5:15 while diving near the intersection of Grossmont Boulevard and Fuerte, just blocks from the school.  I also heard thunder around 4:30 at my home nearby and again around 6 p.m., when heavy rain began.

One mother wrote: “Lightning was present on campus at 2:55 p.m...in the area in general with thunder from campus to Lake Murray/Dallas st at 3:15....rain drops, thunder and lightning began around 5:45 p.m. in the Fletcher Hills area.  It continued for some time as we had a family dinner and discussed why son could not be playing basketball. “

Another resident reported,”We had lightning on Mt Helix at 6:00.”

Yet another said she and her daughters were swimming at Helix High School around the same time as the strike.”We got out because of the lightning.”

AlexTardy, Warning Coordination Meteorologist for the National Service in San Diego,told East County Magazine that in the 15 minutes before the student was struck “There were 12 strikes in and around theEl Cajon region…The forecast had thunderstorms for late afternoon/early evening timeframe,and across Southern California we had over3,000 total strikes which is extremely rare.  About2,000 of those actually hit the ground.”

Tardy,  who also coaches youth baseball, had this to say when asked if a sports practice should have been cancelled.”When you have a forecast that says you will have thunderstorms,  and there have already been 2,000 strikes, and you seek black clouds, what other onfirmation do you need?”

He acknowledged that some parents may become upset when practice is cancelled,  but he affirmed,”If we were asked, we would advise to call it off if you hear thunder.  The common sense rule is if you see a dark, ominous cloud coming your way—and we don’t see those very often around here—and thunderstorms are forecast, you’ve got to take action.” 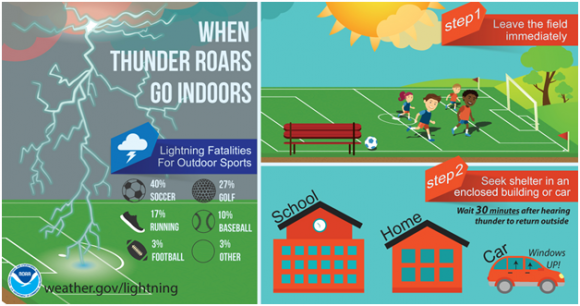 School safety rules for lighting should extend beyond sports teams to also cover students on campus or on busses, Tardy adds.  He says his own son’s school in Carlsbad ignored his plea to postpone a bus trip to El  Cajon for a half hour due to a thunderstorm coming in.”They drove with the storm. There were accidents all around. The lightning was so close….If someone had gotten hurt….it would have been a slam dunk,” he said of any legal challenge filed.

Dennis Richardson is the photographer who notified the GUHSD back in 2010 when he saw El Capitan teams practicing during a thunderstorm with lightning striking about a half mile away. He says  even after the coach was told to dismiss the practice, “they released kids to a parking lot where they were hanging on a metal chain length fence while lightning was striking all the way around.”

Richardson, after the Grossmont incident, told  ECM  back in 2010 he called several  East County school districts to ask about policies to protect kids from lightning in other circumstances, such as while waiting for rides home after school.”They have no plan for lightning,” he says.  He added that one student said a coach told him a fiberglass helmet would protect him from lightning, which is not true.  Richardson adds that when he used to head up construction crews, “if I heard thunder I’d take my whole crew to cover.”

The  Nationa l Weather Service has new guidelines that advise taking cover as soon as the sky appears threatening, since the first lightning strike can be deadly. Though rare, lightning has been known to travel  50 miles or more.

Tardy confirms that the only safe places during a thunderstorm are inside a building or in a vehicle. If caught outdoors,  avoid high ground, never stand under a tree or other tall object that could act as a lightning rod, immediately get out of water  such as lakes or pools that can conduct electricity, and don’t touch anything metal.  Lightning can travel through the ground, though,  so the safest bet is to remember, “when thunder roars,  go indoors.”

Grossmont’s student is fortunate to have survived without apparent serious injury.

In 2014,  an entire soccer team (11 players) died in the Democratic Republic of the Congo due to a lightning strike during a game.Broward school district in Florida faced a lawsuit after a junior varsity football player was struck in the chest and killed by lightning moments after a game was ended due to severe weather.

An NOAA lighting safety report for schools advises,” In the U.S., the largest number of lightning casualties occurs in open areas, including sports fields, playgrounds, etc. This is obviously significant for schools, since they have many activities in open fields: sports, recess, marching band, and other outdoor extracurricular activities. The activity with the fastest rising lightning casualty rate is outdoor sports and recreation, which includes school activities. Thus, it is important for coaches, referees, and leaders of other outside school activities to practice good lightning safety.”