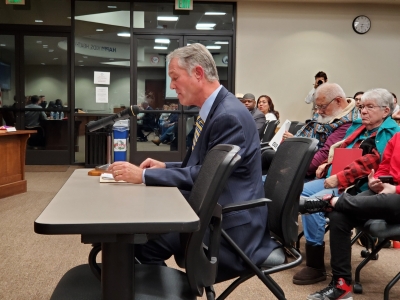 "I've heard that it's been communicated that Grossmont High School District was fully aware of this charter petition. I need to say this is simply not true. That communication never took place until yesterday.  In fact, quite the opposite.” --GUHSD Superintendent TIm Glover (photo, left)

January 18, 2020 (El Cajon) -- Observers of the political hijinks which have become customary at meetings of the Cajon Valley Union School District (CVUSD) board of trustees were not disappointed at the last regular meeting for the year on December 17th.

The meeting started with school board President Tamara Otero advising her fellow board members “to be careful in any contact” with Board Trustee Jill Barto in light of Barto’s recently filed federal lawsuit against the district, which alleges violations of her civil rights and First Amendment freedoms.

Then the spotlight shifted to Grossmont Union High School District Superintendent Dr. Tim Glover. Glover visibly caught the board off guard when he addressed the trustees, raising objections to Cajon Valley’s preliminary plan to expand and start a new charter high school (grades 9 to 12) at the site of the district’s Bostonia Language Academy, which encompasses kindergarten to eighth grade. The new charter school would be called the “Bostonia Global Charter School.”

Like Bostonia, it would offer students a “bilingual, globally focused, interests-based experience.” It would serve an estimated 1,275 students. 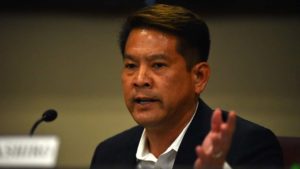 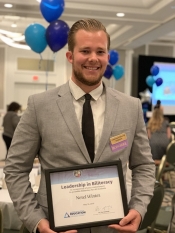 During the meeting, Miyashiro said that this charter school process began several years ago with the district’s attorneys. But the “pause” button was hit when the district began pursuing its “World of Work” curriculum.The idea was revived by Miyashiro when Bostonia’s principal, Nerel Winter, approached him to ask if the charter would be possible.

“In order to legally serve kids from [grades] nine to twelve, we would have to open a charter school that serves all grades,” Miyashiro said. “We had some draft language from a couple years ago which we established with our attorneys. With the plan that Nerel brought forward, if we were to say ‘yes,’ we would have to find facilities that would accommodate such a program and also funding that would provide for startup planning and resources to achieve this audacious vision,” Miyashiro said.

If all goes as planned, the new charter school would be funded by New Schools Venture Fund and the State of California’s official charter startup fund, the Walton Foundation, and other education-oriented philanthropies. But in order for the organizations to consider funding the new charter, preliminary board approval is required.

A charter school is publicly funded, independently run alternative to a traditional public school. While these schools are given greater autonomy from a school district, in return they are subject to greater accountability. Such a school may offer concentrated study in language, science, or performing arts.

Should such a school not achieve its intended goals, it may be subject to being shutdown and the students are returned to a traditional public school. The downside of some charter schools is that teaching staff may not have the same teaching and training credentials as those who might be found in a traditional school. Private for-profit charter schools must also follow state mandated education standards.

“Approving of this petition is not a guarantee of a school. It is qualifying to go up to level two and qualifying for startup funding. Establishing a school requires facilities and funding to do so,” said Miyashiro.

But already, clouds over the proposal loom in the horizon.

Miyashiro’s proposal sparked the ire of Grossmont Union High School District superintendent, Dr. Tim Glover, EdD, who said he did not know about the petition until 24 hours before CVUSD’s board meeting.

In his opening salvo, Glover said, “I’m here tonight with great concerns about communications of the process related to this charter petition. I ask the board, ‘How long have you been informed of this charter school petition?’ I ask the board, because, as I, the leader of community partner agency was not provided with the professional courtesy about being informed about this agendized public hearing and approval for discharge petition till yesterday at noon through a text that led to a call with the superintendent. The text had two parts: one to let me know that Cajon Valley would be at my school board meeting last night to announce this Charter item, and two, to request if I had time to chat for 10 minutes to each other.”

Glover continued, “Furthermore, I've heard that it's been communicated that Grossmont High School District was fully aware of this charter petition. I need to say this is simply not true. That communication never took place until yesterday.  In fact, quite the opposite.” He added that his understanding over a year ago was “that the agreement and the collaboration between our districts on the World of Work initiative would meet the goals of such a charter process.

“Regarding the process for approving charter petitions, charter school law contemplates 30-to-60-day process of actions by authorizing the board in order to gain sufficient input from the many stakeholders involved. The petition usually starts when the district receiving the petition, followed by a public hearing to consider the level of support for the petition, and followed by approximately 30 days of time for the authorizer to have staff review petition for contents and compliance which are charter law. This 30 days is also used to work with the petitioner and stakeholders to form the district's recommendation to the board for approval or denial of the petition,” he explained.

“In my less than 24 hours of review of this document, I have some wonderings that I hope all of you also have,” he continued. “First one, are you petitioning yourselves? Second, where are the supporting signatures for this petition? Third, where [are] the detailed budgets for the actual operations of the charter? Fourth, where are the comprehensive descriptions of specialized educational programs like special education within your petition? Fifth, has this petition been vetted against any sort of compliance rubric like which are provided by many law firms in San Diego, across the state, maybe from the charter office in the San Diego County Office of Education? And finally, and perhaps most importantly, I wonder about the legal and moral implications of Cajon Valley initiating a charter school to serve students in grades nine through 12 and doing that within the Grossmont Union High School District boundaries with the district with sovereign rights established to provide California public education degree K-through-twelve within those boundaries.”

Grossmont’s Superintendent Glover concluded, “So at this time -- my time to a close, can I ask this: please, please consider pushing the pause button and don't rush into this action and really truly engage stakeholders to be involved in the process. Thank you.” 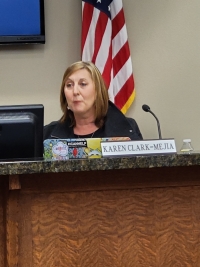 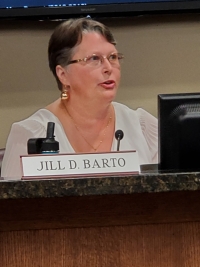 Board of Trustees member Jill Barto was the lone dissenter on the agenda item. Barto, who generallly supports charter schools, stated in the hearing that while she supports a charter high school in the CVUSD, she called on her fellow board members to follow Glover’s assertion to “push the pause button” on the petition. (Photo, left: trustee Jill Barto voted against)

The GUHSD has previously filed lawsuits to shut down other charter schools that the district contended were operating without the district’s permission, raising the specter of yet more litigation against the CVUSD.

Correction:  An earlier version of this article contained inaccuracies in a list of new officers for the California School Boards Association. The newly elected CSBA board is as follows:  Xilonin Cruz-Gonzalez of the Azusa Unified School District is the new president of CSBA, rising to the post after previously serving as president-elect.  joining Cruz-Gonzalez in CSBA’s elected leadership are President-elect Suzanne Kitchens of the Pleasant Valley School District, who defeated Tamara Otero of the Cajon Valley Union School District, and Vice President Dr. Susan Heredia of the Natomas Unified School District. Dr. Emma Turner of the La Mesa-Spring Valley School District will serve on the CSBA board as Immediate Past President.

While I respect that process, public outreach, and a comprehensive and thorough petition is vital to a strong and valid charter effort, let's not lose sight of the fact that Grossmont can ill-afford hemiraging students needed to fill the seats on campuses newly remodeled and expanded by their taxpayer funded building program. Remember their argument not to build a facility to accommodate one of its own community's needs because of declining enrollment, only to dump millions in campus projects down the hill? Yet Grossmont continues to spend, where's the outcry against their building expansion in times of declining enrollment? Grossmont does not have the right to stomp on the educational desires of other school districts to grow their programs and serve their community because of its own failure to stop spending when they lack the needed enrollment.

Miyashiro and the board can't handle the schools they are responsible for now. They are not equipped to manage high school behaviors, curriculum and diploma requirements. They couldn't even tackle step one of setting up a charter, establishing a budget. Glover is not the first person to identify Miyashiro as a liar and will definitely not be the last.