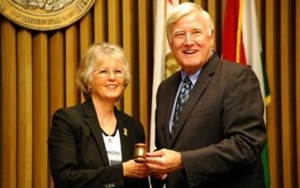 June 18, 2015 (San Diego)--On the eve of a special conference in San Diego on aging, groundbreaking initiatives aimed at helping the county’s oldest and most vulnerable residents gained national recognition.

The National Association of Counties presented San Diego County an Achievement Award for The Alzheimer’s Project, a regional effort launched last year to address the terrible toll of Alzheimer’s disease on families and communities.

“With the size of our elderly population on the upswing, it’s critical we find innovative ways to help our oldest citizens,” said county Supervisor Dianne Jacob, who spearheaded both initiatives. “These national awards validate our efforts and tell us we’re on the right track as we move to improve the health and safety of our seniors.”

The awards came as hundreds of seniors prepared to attend the county’s Vital Aging conference Wednesday. The theme of the free event was “Boosting Your Brainpower” and included speakers and exhibits on how exercise, good nutrition and activities can help seniors keep their mind, memory and mood in good shape.

The Alzheimer’s Project has brought together for the first time the region’s top elected officials, researchers, healthcare experts and others to accelerate the search for a cure and assist those with the disease, along with their caregivers.

Meanwhile, the county is working with assisted living facilities to develop a voluntary rating system, believed to be the first of its kind. It would highlight the region’s better facilities so families can make a more informed decision about where to place a loved one.

Among the speakers at Wednesday’s Vital Aging conference were be brain health expert Dr. Paul Nussbaum, a neuropsychologist at the University of Pittsburgh, and Supervisors Dianne Jacob and Greg Cox.

Cox joined Jacob last year in initiating the rating system, along with other elder care improvements.

More information on the Vital Aging event is available at http://www.aisevents.org.