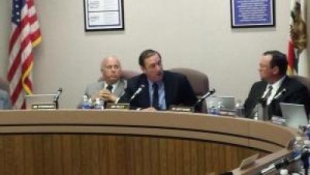 February 19, 2015 (San Diego’s East County)--In a 3-2 vote which was preceded by rancorous accusations, sniping, sharp retorts and loud outbursts between board member Priscilla Schreiber and board chairman Robert Shield, the Grossmont Union High School District (GUHSD) approved a measure to appeal an court injunction forcing it to set aside $42 million towards building a disputed high school in Alpine at its regularly scheduled February 11th meeting. Schreiber and board member Jim Stieringer voted against the resolution.

Several times during the meeting, Schreiber expressed concern that the board had voted twice to set money aside for the project and that it was acting in “bad faith." Stieringer said he opposed an appeal because the decision to set aside $42 million for the high school “is well reasoned.” 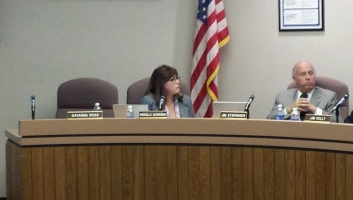 The vote comes on the heels of a January 22nd ruling by Superior Court Judge Joel Pressman that says the district must set aside $14 million in bond money immediately and another $28 million by January 2016 for the building of a high school in Alpine. The decision was in response to a lawsuit filed against the GUHSD by the Alpine Union School District and an Alpine taxpayer activist group enjoining the district from spending money on other projects other than building a high school in Alpine using money from two recently voter-approved school bond measures.

“This lawsuit/injunction is going to be one of the most serious issues facing the district for the next decade," Shields said. "There has been a very effective and very well organized group who has been very creative in keeping life going to prevent us from doing what I believe is our responsibility and job," he continued to say. Later on in the meeting Shields said, "I'm trying to defend our district from a poorly-run district trying to effectively steal money from us."

Earlier in the meeting, GUHSD superintendent Ralf Swenson outlined the consequences of the judge's ruling citing numerous delays in replacing outdated heating and air conditioning equipment at West Hills High, modernizing classrooms and buildings at several district high schools, and building new events enters at Grossmont and Santana high schools. Also cited would be a delay in upgrading campus security and safety systems throughout the district. Another  major point of concern discussed was the probability of continued maintenance of buildings scheduled to be torn down and replaced.

However, critics of the board’s actions have pointed out that their community has safety concerns, too, since several students have died on highways driving long distances to schools or after-school activities.  Prop H was passed as the “Safety and Overcrowding” initiative and Prop U was passed to finish items not completed with Prop H funds.   Prop U bond money has been spent on a new Performing Arts Center at Helix, new events center at Grossmont , and “other non-safety, non-essential, non-bond listed projects that are being constructed, like the beautiful, yet grandiose Olympic Swim Facility at Granite Hills High School,” Alpine education advocate Bill Weaver recently told East County Magazine, adding. “Nice, however it is not essential, and is not a safety upgrade.”

At stake now is bond language in Prop. U which stated that a high school for Alpine would be built after enrollment at the existing high schools exceeds 23,245 students. In the lawsuit, the plaintiffs allege those enrollment numbers were met during the 2008-09, 2009-10 and 2010-11 school years. While the district says that the “trigger” had been met, it had not acquired the land yet for the school; and now the enrollment is below the threshold. Presently the district currently has 21,576 students and doesn’t expect to return to the enrollment trigger until after 2020. It was the opinion of a school bond specialist that the number would have to be met exactly or be above the stated enrollment figure.

While both Schreiber and Stieringer expressed their concern that the expense for a legal appeal could reach upward of $250,000, Shield responded that it was worth spending money on the appeal. He said to appeal the injunction would save East County homeowners $1.3 million per year in interest on the $42 million ordered to be set aside. "This is the epitome of wasteful spending. I am going to fight wasting over a million dollars a year in taxpayers’ money to pay interest on something so it sits,” Shield said.

Shield, along with trustees Jim Kelly and Gary Woods, pushed through the resolution which also included a paragraph which which claimed that the Alpine Union School District could be forced into spend up to $750,000 if it chooses pursue the litigation against the GUHSD. 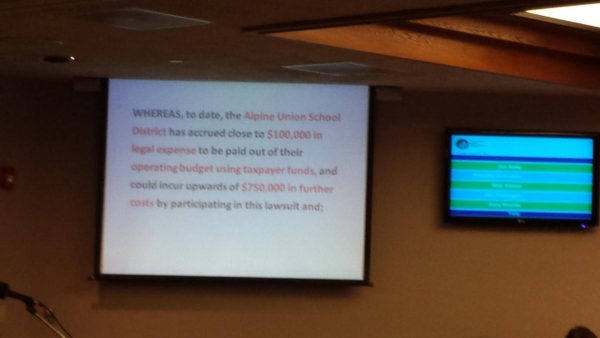