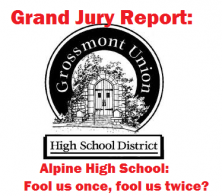 It is the intent of the Grossmont Union High School District Board of Trustees to give serious consideration to construct the 12th high school:

· After districtwide enrollment at the existing comprehensive high school sites, including the two current charter schools, equals or exceeds 23,245 (which is the official CBEDS enrollment) at the time of release of request for construction bids, begin and complete construction… (Excerpt from Proposition U on November 4,2008 ballot)

· Upon restoration of ADA funding for the district to the level it was at the time Proposition U was passed in 2008, the Governing Board will review and consider resumption of the construction process. (GUHSD Resolution No. 2012-05)

GUHSD Board member Priscilla Schreiber issued a scathing criticism of the Board majority’s action.

“In my opinion, the media statement only satisfies the Dec. 31st deadline and covers the Board's own statement, in the original response, that it would commit to alerting the media.  But it, in no way, satisfies what, I believe, the Grand Jury recommended,” she wrote in an e-mail to ECM.

Below is Schreiber’s response in full:

How long has the Alpine Community heard that it is the intent of the Grossmont Union High School District, to seriously consider, the construction of a twelfth high school; let me count the ways:

Since before the 2002 Joint Resolution between the two school districts, agreeing that if the GUHSD would build the school, Alpine would cease it's unification efforts;

Since the 2004 passage of Prop H that included language to build the school, of which, $5M was put towards that effort;

Since the July 2011 GUHSD Resolution #2012-05 that further communicated the District's intentions to proceed with grading and the submittal of phase 1 building plans to DSA (Dept. of School Architect).

Then, in June 2012 under the Board leadership of Shield's and Kelly the community of Alpine was betrayed when the building plans that had been submitted to DSA were pulled, unbeknownst, to the Board and the public, and without Board authority. Then, in November 2012 the money available for grading was spread across other projects in the District, at the recommendation of the superintendent and at the direction of the Board Majority.

Hence, the Board violated it's own directive by not completing the items that were set forth in said Resolution. A Resolution meant to bring clarity to the community of Alpine and show the Board's good faith intentions on how to proceed with the new school.

These same "intentions" are echoed throughout the Board Majority's response to the Grand Jury and it's long term commitment to building the school.

But there is no good faith, no intentions, because there is no financial commitment to back building the school, and there will be no money left in Prop U.

The District would have to pass another bond to build the high school and the Board majority knows the community is not going to pass another bond just to build it. Thus, the intended consequences of Mr. Kelly's 11th hour amendment, to kill the school in Prop U, becomes the reality most of us knew it was designed for.

In my opinion, the media statement only satisfies the Dec. 31st deadline to make a statement to all appropriate media. It also supports the Board's own statement in the original response that they would commit to alerting the media,. But it, in no way, satisfies what the Grand Jury recommended.

Alpine is taxed for 50+ years, has nothing to show for it after two bonds promised a return on their investment by building a high school and that would have supported growth in the community.

This Board couldn't even build an 800 capacity school that was called for in the Bond when they had the window of opportunity that met the imposed enrollment trigger. Instead of honoring their commitment, the Board Majority, front-loaded the Prop U Bond Program with new projects (non-voter approved) projects, while inflating budgets and scopes and pushing the new school so far out into the future that there would be no money to build it.

There are no more monies coming from the state in the form of matching funds unless the state passes another facilities bond measure in 2014, which at this time, seems highly unlikely. We have burned through Bond proceeds on projects that were projected to get CTE state matching dollars that will not materialize.

The intentions by this Board are crystal clear; Alpine will not get their school, not get a return on their investment like all out other communities, and will feel the crippling affects in their growth and property values; and then live to fight the next battle by wanting to control their own destiny by exchanging their tax burden into a tax benefit and community investment.

Alpine can take matters in their own hands, they have a wonderful community with equally wonderful people, who, if they stand together and are committed can control their own destiny and finally see a return on their collective investment.

As for the media release, I appreciate the Board's consideration of my concerns that the Board could have been at risk for being out of compliance with the Grand Jury's recommendation, to announce via all appropriate media, the Board's final decision with regard to the Alpine Community, by Dec. 31.

In my opinion, the media statement only satisfies the Dec. 31st deadline and covers the Board's own statement, in the original response, that it would commit to alerting the media.  But it, in no way, satisfies what, I believe, the Grand Jury recommended.

I understand the Board Majority's reluctance to actually make a final decision as per the Grand Jury's recommended action to publicly commit to either a creditable timeline to build the school and set aside money for that purpose, or make reasonable steps to help Alpine's unification efforts.

It's just not in them to do right by Alpine.

Sal Casamassima, chair of the Alpine High School Citizens Committee, also issued a blistering response to the GUHSD statement. Below are his remarks in full.

If the statement from Grossmont didn’t have such dire consequences for the citizens of Alpine it would be laughable. First, the Grand Jury report demanded that prior to 12/31/13 GUHSD was to support construction of the Alpine High School (with a credible timeline and funding) or support the Alpine unification effort. Instead, and in defiance of the Grand Jury, they state that their “intent” is to “give serious consideration to construct the 12th high school”. Furthermore, even with such a qualified non-statement they add two additional conditions precedent – 1) the enrollment trigger and 2) the restoration of ADA funding to 2008 levels.

As AHSCC has said repeatedly, both of these conditions are bogus.  The enrollment trigger has been satisfied, not once but three times. It was Grossmont’s failure to issue construction bids when the enrollment levels were satisfied that has not been fulfilled. Thus Grossmont makes the ludicrous argument that the enrollment trigger remains unsatisfied because of its own failure to act. The other condition of 2008 ADA funding was created out of thin air by the Grossmont Board as another obstacle and excuse not to build the school.  It has no basis in the bond language and the only Prop H or Prop U project to which it applies is the 12th high school. Finally, of course, is the reality that even if Grossmont deems that all of their imaginary conditions are satisfied, they will have exhausted all available bond funds by placing the 12th high school at the bottom of their project list.

The bottom line is that the statement to the Grand Jury is a complete fabrication. The facts demonstrate there is no “intent” to build the Alpine high school and there is no consideration, much less “serious consideration”, to constructing the school. Faced with this ongoing distortion of the truth and facts by Grossmont, and their defiance of the Grand Jury’s recommendations, the Alpine unification effort continues unabated.